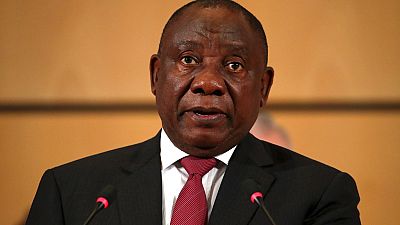 South Africa’s president Cyril Ramaphosa on Thursday unveiled a list of measures that the state will undertake to address the rampant cases of to fight rape and murder of women as the nation reels from high profile murders in recent days.

“Violence against women has become more than a national crisis,” he said in an address to the nation broadcast on national television and radio stations.

“It is a crime against our common humanity”.

Men that kill and rape must stay in jail for life.

“Our nation is in mourning and pain. Over the past few days, our country has been deeply traumatised by acts of extreme violence perpetrated by men against women and children.

“These acts of violence have made us doubt the very foundation of our democratic society, our commitment to human rights and human dignity, to equality, to peace and to justice.

His address came after two consecutive days of protests in Cape Town, demanding an end to the scourge of rape and murder of women.

At least 137 sexual offences are committed per day, mainly against women, according to official figures.

Women Minister Maite Nkoana-Mashabane, said this week that more than 30 women were killed by their spouses last month alone.

The Cape Town rallies were prompted by recent brutal murders that have triggered outrage and much soul-searching in a country that is seen as one of the world’s most dangerous places for women and often appears numb to murder and sexual violence.

In one case University of Cape Town student, Uyinene “Nene” Mrwetyana, 19, was raped and bludgeoned to death when she went to a post office on August 24.

And on Friday boxing champion Leighandre “Baby Lee” Jegels, 25, was allegedly shot dead by her partner, who was a police officer.

In another a man on Tuesday hung his three children aged between four and 10, and his teenager step-daughter in a fit of rage allegedly over a divorce row with their mother in southeastern KwaZulu-Natal province.

Ramaphosa on Thursday left the World Economic Forum meeting in Cape Town early to accept a memorandum delivered to parliament by a mass demonstration of mainly women.

“Enough is enough and we are going to act,” Ramaphosa told the women. “Men that kill and rape must stay in jail for life.’‘

“The law must change that once you have raped and kill you get life, no bail!” Ramaphosa told the angry crowd.

He has directed parliament to identify “emergency interventions” as he sought “harsher minimum” sentences for crimes against women and children.

The country has since 2013 established 92 sexual offences courts and 11 more will be opened this year to accelerate conviction rates, he said.

“I agree completely that the killing of women must be bought to an end here in South Africa,” he said. pledging “we will use every means at the disposal of the state”.

Last year South Africa recorded a 6.9 percent increase in the number of murders countrywide, with an average 57 murders committed each day.

Ramaphosa’s speech was however quickly undermined by an erroneous broadcast of an unedited version by his speech, that was interpreted by many on social media as proof that the president does not take the matter seriously.

In the clip, Ramaphosa, who is reading off a teleprompter, smiles midway the sombre speech, saying ‘‘Let’s start again. I made a mistake there’‘.