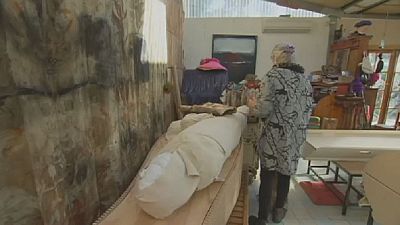 Would you mind opting for a natural burial when you die?

Well, in Australia’s Tasmanian city, the idea is catching on with people.

Pam and Neil Thorne are undergoing treatment for cancer. And both have spent time thinking about death during their illnesses.

It's better than cremation because of the pollution, the energy that it takes to burn our body.

“As a child I was taken to the cemetery every Sunday afternoon by grandma to put flowers on the… and I honestly think that’s what turned me off cemeteries. I just think it would be so nice for the family if we were in a park like setting you know, instead of the plastic flowers and the regimentation of a traditional cemetery”, Pam said.

“It’s better than cremation because of the pollution, the energy that it takes to burn our body”, Neil added.

Mea Souris has spent the last five years improving her peace pods. She’s now also made a shroud carriage to help transport people who only want to be wrapped in fabric.

“The main material is recycled paper, a little bit of plywood, leather, straps for handles and simple hessian”, Souris said.

“You have to hold that land in trust and what that means is that you have to be the cemetery owner of the land and the manager and that makes it really difficult for little groups of people who want to get together and do something natural and beautiful”, Lyon said.

A lobby group in another city in Tasmania, Burnie, has succeeded in convincing it’s council to pass a motion for a natural burial ground. But land is yet to be identified and they’re worried it will soon be too late.

“This trend is a growing trend, it’s a worldwide trend and I do see that as this legislation is being written at the moment that it’s been perhaps a missed opportunity”, Lyndal Thorne of the Groundbreakers lobby group said.

Natural burials are permitted in Tasmania as long as the bodies are covered in a metre of soil.

But there are concerns the new draft ‘burials and cremations act’ will hamper efforts for a new stand-alone natural burial site in the future.

The Tasmanian Government says it’s open to community consultation and is calling for submissions to the draft bill.