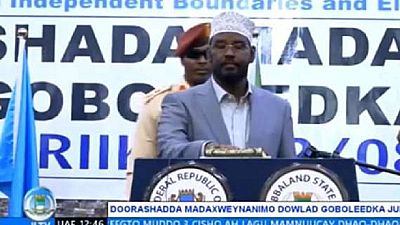 Ahmed Madobe has secured reelection as leader of Somalia’s semi-autonomous Jubbaland region after a poll in the capital Kismayo on Thursday morning.

Full name Ahmed Mohamed Islam, Madobe polled 56 out of 74 votes whiles his contender Anab Mohamed Darir got 17 votes. It was a first-round win for the incumbent since he got more than two-thirds of the vote.

He has since been sworn into office despite the federal government saying it was not going to recognize the outcome according to reports.

The election had a heavy dose of subregional “meddling” with Kenya thought to be throwing their support behind Madobe whiles Ethiopia and the Somali government backed Darir.

Kismayo was put on lockdown days to the vote with authorities reporting that an Ethiopian aircraft had at a point been refused permission to land.

Ethiopia and Kenya play significant security roles in Somalia as part of efforts to combat the Al-Shabaab insurgency that continues to rattle the Horn of African nation.

Last Saturday the Somali government said it would not recognise the result of the election in Jubbaland, saying the candidate selection process violated the national constitution. Analysts held that the stand-off risks sparking a dangerous wider conflict.

The stakes for all parties, local and international, are high. With good seasonal rainfall, lush farmlands and the lucrative Kismayo port, Jubbaland is one of Somalia’s more wealthy and stable regions.

As well as providing a friendly buffer-zone for Kenya, its shoreline delineates a hotly contested maritime zone claimed by both Somalia and Kenya with potential oil and gas deposits.

Kenya does not want to lose its ally, Madobe, said Hussein Sheikh-Ali, a former national security advisor and founder of the Hiraal Institute, a Mogadishu-based think-tank. “They installed him and he’s a trusted figure,” he said.

Lockdown in Somali city of Kismayo ahead of crucial Jubbaland polls https://t.co/EsH0DRiLu5