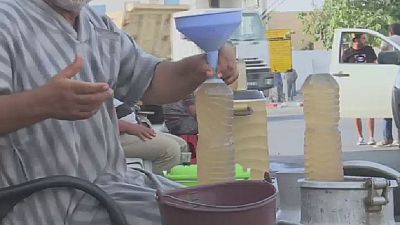 Early in the morning, locals rush to purchase their favorite bottle of ‘‘legmi’‘ in Gabès, South of Tunisia.

The delicate drink is made from natural palm tree. Ridha Omrane Moussa owns 25 palm trees and produces 8,000 liters of the drink in a year.

“In the summer of the month, it is fragile because of the heat. The temperature is very high. It is fragile so it can not sit in the heat because it rots and turns into vinegar,’‘ Moussa said.

Instead of having breakfast, it's full of good sugar, a croissant and a coffee, they will drink ''legmi'' instead.

Extracting ‘‘legmi’‘ takes experience and techniques which was passed on by ancestors. A bottle of a liter of ‘‘legmi’‘ sells for about 2.5 dinars of 0.80 euros.

“Every day, I sell between 40 and 50 liters from spring until October. They do not want cold “legmi”, Slah Marherzi said.

‘‘Legmi’‘ has high sugar content and is highly appreciated during the month of Ramadan, a fasting period for Muslims. The local drink is mainly consumed from March to October and is often used to break fast.

“It’s people here instead of having breakfast, it’s full of good sugar, a croissant and a coffee (in the morning), they will drink ‘‘legmi’‘ instead, it’s the same’‘, Gabès resident, Haykel Boukachoura noted.

In Gabès, there’s a popular saying that ‘‘after God, there’s the palm tree’‘. And that’s how deeply locals here love their delicate ‘legmi’ drink.

However, activities of the Tunisian Chemical Company, which has been operating phosphate mines since the 1970’s, is posing risks to these precious vegetation zones.