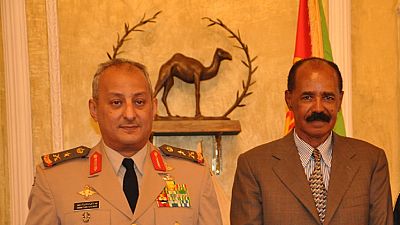 <p>Eritrean president Isaias Afwerki earlier this week (August 6) met with the commander of Saudi Arabia’s military offensive in Yemen, Lt. General Prince Fahad bin Turki Abdulaziz.</p> <p>Eritrea’s Minister of Information said the two held talks as part of deepening bilateral relations between the two countries especially in the area of regional security.</p> <p>A <a href="http://shabait.com/news/local-news/29038-president-isaias-received-senior-saudi-delegation">statement on the ministry’s website</a> said: “The meeting that was held at the State Palace was focused on the development of bilateral relations between Eritrea and Saudi Arabia as well as security of the Red Sea region.</p> <p>“The meeting was attended by Maj. Gen. Humed Karikare, Commander of the Eritrean Navy and Col. Melake Teklemariam , Chief of Staff of the Eritrean Navy and Maj. Gen. Yahya Mohammed Asiri, Naval Operation Authority, Brig. Gen. Khalid bin Mohammed Alramali from Joint Forces Command, and Brig. Gen. Hassan bin Saad Alshahrani Naval Operation.”</p> <p>Lt. Gen. Prince Fahd bin Turki bin Abdulaziz Al Saud is a Saudi Arabian prince and military officer who serves as the commander of the Saudi-led coalition joint forces operating in Yemen.</p> <p>Relations between the two countries have been strong in the past years, more so after the Ethiopia – Eritrea peace deal. Afwerki and his Ethiopian counterpart were awarded by King Salman for their respective role in the July 2018 deal.</p> <p>President Afwerki has made a number of trips to Saudi as has his foreign affairs chief Osman Saleh. He also received a Saudi delegation led by Foreign Minister Adel el-Jubeir.</p> <blockquote class="twitter-tweet"><p lang="en" dir="ltr">President Isaias Afwerki received at State House today a Saudi delegation led by Lt. General Prince Fahad bin Turki Abdulaziz, Commander of the Coalition Forces against Terrorism. The talks centered on Eritrea-Saudi bilateral ties as well as the security of the Red Sea region. <a href="https://t.co/5d1s9GlZWZ">pic.twitter.com/5d1s9GlZWZ</a></p>— Yemane G. Meskel (@hawelti) <a href="https://twitter.com/hawelti/status/1158754901847093249?ref_src=twsrc%5Etfw">August 6, 2019</a></blockquote> <script async src="https://platform.twitter.com/widgets.js" charset="utf-8"></script> <h2 style="font-size:16px;"> Saudi’s 2018 move to create Red Sea political bloc </h2> <p>Back in 2018, Saudi Arabia organized a summit seeking an alliance with six countries bordering the Red Sea and the Gulf of Aden, a strategic area vital to global shipping and increasingly an arena of contention with regional rivals like Iran, Turkey and Qatar.</p> <p>The African representatives included Egypt, Djibouti, Somalia and Sudan. Others included Yemen and Jordan.</p> <p>Eritrea, with Red Sea islands and a mainland coastline of 1,150-kilometres (715 miles), was not present at the time. </p> <p>“This is part of the kingdom’s efforts to protect its interests and those of its neighbors and … to stabilize the region that we live in and to try to create synergies between the various countries…” Saudi Foreign Minister Adel al-Jubeir told reporters after a day of closed-door meetings.</p> <p>“The more cooperation and coordination that you have among the countries of this region, the less negative outside influence will be on this region,” he said.</p> <p>Saudi Arabia and its Gulf ally the United Arab Emirates increasingly view the Horn of Africa coastline as their “western security flank” and fear their adversaries could gain a foothold in the region.</p> <p>The Red Sea also includes the Bab al-Mandeb strait, through which an estimated 3.2 million barrels of oil per day flows toward Europe, the United States and Asia. In recent years the waterway has been targeted by pirates and Houthi fighters from Yemen.</p> <p>Jubeir said the meeting also discussed boosting trade and conserving the environment.</p> <p>As part of a push to diversify its economy away from oil, Saudi Arabia has announced several mega-projects along the Red Sea, including a $500 billion business zone shared with Egypt and Jordan as well as a luxury tourism destination. </p> <p><strong><em>Additional files from <span class="caps">REUTERS</span></em></strong></p>