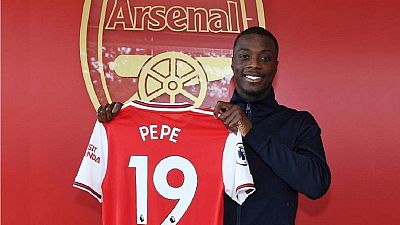 There is a new record holder for the transfer of an African footballer anywhere in the world.

The deal includes English Premier League side, Arsenal and French Ligue 1 side, Lille – at the heart of the transfer is Ivorian international, Nicolas Pepe.

Arsenal dished out $89m to Lille making Pepe the most expensive African footballer ever. He signed a five-year contract with the London-based side.

His amount overtakes what Chinese side Beijing Guoan paid for DRC’s Cedric Bakambu from Spanish side Villareal. Reports indicate that the March 2018 transfer of Bakambu was $79m.

Pepe’s records for Lille stand at 35 goals in 74 Ligue 1 appearances. He spent two seasons at Lille having transferred to the side from another French side Angers in 2017.

On his signing for Arsenal, he said: “Being here is very emotional.” He added that he had “come a long way and struggled a lot and so signing for this great club is a big reward.”

Welcome to The Arsenal, Nicolas Pepe ?

Nicolas Pepe has the tools to help make Arsenal a formidable attacking force, both home and away, in 2019/20.

The skilful winger possesses a gilded left foot, but the 24-year-old’s standout quality is the incredible acceleration he generates over the first five to 10 yards.

Either from a standing start or when running onto a loose ball, the Ivory Coast international has a speedy gear change that can provide Arsenal with a fresh dimension in wide areas.

Unai Emery’s men struggled to stretch opponents on the flanks last season, lacking a natural winger that could make penetrative runs beyond defenders on a regular basis.

With his combination of speed, trickery and technique, Pepe solves that issue.

“FULL ANALYSIS: WHAT PEPE WILL BRING TO ARSENAL”: