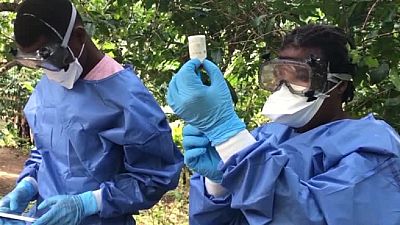 Authorities in Rwanda on Thursday refuted reports that the fishmmonger responsible for Uganda’s renewed Ebola surveillance, had crossed into the border town of Gisenyi.

“There is no Ebola in Rwanda as far as we are concerned. We have a strong surveillance system in place that helps us to prevent its entry,” Malic Kayumba, Head of Communications at Rwanda Biomedical Centre told The EastAfrican.

‘‘We investigate every day and have a system that informs us of all we need to know, and such news would be coming from us. If there was entry of a suspected Ebola victim we would have known.’‘

There had been reports by the Word Health Organisation (WHO) that the fishmonger who vomited at a popular market in Uganda’s border Mpondwe town, might also have done business in Rwanda before returning to DRC where she died.

WHO has since withdrawn the reports which were reportedly published without the knowledge of WHO headquarters in Geneva.

“Two situation reports… have erroneously included unverified information,” a statement from WHO said late on Thursday.

The statement did not explain what was unverified in the reports, or mention Rwanda, which is on high alert after a confirmed case of a pastor who later died in the Congolese border city of Goma.

The city of more than 1 million serves as a regional and international gateway and borders Rwanda, which said on Thursday it was intensifying screening at ports of entry and asked citizens to avoid unnecessary travel to Ebola-affected areas.

Rwanda has never had a recorded case of Ebola and has trained over 23,000 medical personnel, police officers and volunteers in preparation to fight outbreaks.

The World Health Organisation (WHO) will work with authorities in Uganda to vaccinate about 590 fishmongers at the Mpondwe market, following the discovery that one of them vomited at the Ugandan market on July 11 before dying in the Democratic Republic of Congo (DRC).

“The surveillance teams established that she had four episodes of vomiting on the day she was in the country,” read part of a joint statement on Wednesday.

‘‘We are yet to establish the woman’s movements or who had transported her or her goods,’‘ it added.

On July 12, the trader travelled to Beni in DRC and was admitted in the Beni Ebola Treatment Unit on July 13. She died on July 15 after testing positive for Ebola.

‘‘The health ministry and WHO appeal to all Ugandans to remain vigilant and alert. Avoid handshaking, hugging, mass gatherings and observe infection, prevention and control practices such as washing hands with soap and clean water at all times both at health facilities and communities,” the statement continued.

Uganda had been previously hailed by WHO for containing the spread of the virus after two people died of the Ebola virus in the Western Uganda district of Kasese.

Since then, no other Ebola cases have been reported within Uganda, and authorities reiterated on Wednesday that there are no confirmed Ebola Virus Disease case in Kasese district or any other part of Uganda.

The WHO which declared Congo’s Ebola outbreak an international health emergency, has warned that the nearby countries of Rwanda, South Sudan, Burundi and Uganda are the most at risk, while Central African Republic, Angola, Tanzania, Republic of Congo and Zambia are in a second tier.

The global body has however urged countries not to close borders or restrict trade. Ugandan authorities confirmed that all places of economic and social interaction in Uganda such as national parks and tourist sites are open and accessible to the public.

Over 6,000 people have been vaccinated in Uganda since November 2018.