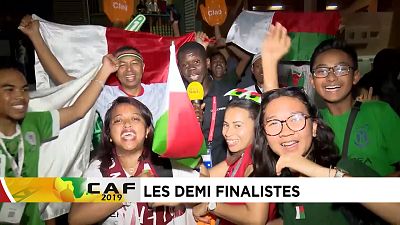 End of the road for sensational Madagascar as 2015 champions Cote d’Ivoire missed out of the semi final. Hello and welcome from wherever on the globe to our Special AFCON on your Pan-African news channel Africanews.

Algeria and Tunisia continue to be the torch bearers of North Africa at the ongoing Africa cup of Nations following the elimination of hosts Egypt and Morocco in the round of 16 by South Africa and Benin respectively.

Algeria on Thursday booked their seventh Africa Cup of Nations semi-final appearance after beating Cote d’Ivoire 4-3 in a dramatic penalty shootout in Suez. The two nations could not be separated in 120 minutes of football action with the scoreline remaining one goal apiece.

The desert foxes victory ensured they even their head to head record against the elephants of Cote d’Ivoire.

Algeria’s reward for dumping cote d’Ivoire out from the competition is a tricky semi-final tie against the super eagles of Nigeria on Sunday.

Reports from Egypt say Ivory coast Captain Serey Die who missed the last penalty last night against Algeria has decided to quit international football with just over 45 appearances for the Elephants. He was a member of the winning side that dominated the continent in 2015.

Every good thing has to come to and end. The Carthage eagles of Tunisia ended Madagascar’s fairytale run in Egypt with a 3-0 victory in Cairo, we bring in our man from Cairo.

The Teranga Lions of Senegal will take on the Carthage Eagles of Tunisia in the first semi final match which kicks off at 4 pm GMT. Afterwards, the Desert Foxes of Algeria play the Super Eagles of Nigeria in the late kick off match at 7 pm GMT on Sunday July 14.