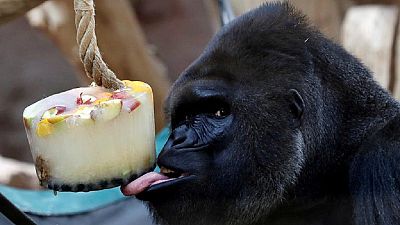 A gorilla in a public zoo is at the center of a financial probe in Nigeria after officials of the Kano Zoological gardens said the anthropoid ape of swallowing funds.

How much money is involved

The gorilla is said to have swallowed 6.8 million naira (equivalent to over $19,000). The monies in question are said to be gate fees collected by patrons of the zoo especially during the recent Eid-ul-Fitr festivities early this month.

The head of the zoo and police late last week confirmed the incident. “police are investigating what happened – all I can say is the money is missing,” Umar Kashekobo of the zoo was quoted to have said.

The state governor, Abdullahi Ganduje has now ordered the anti-corruption commission to open a probe into the issue, the state-run News Agency of Nigeria said.

“The order was given on Friday and the commission has already swung into action,” a statement by the Chief Press Secretary to the governor, Abba Anwar, said on Sunday in Kano.

The order directs the commission to look into the immediate and remote circumstances of the allegation and “unearth everything surrounding the incident,” media reports added.

Nigeria has in the past few years had animals being at the center of big news items. The presidency in 2017 said rat infestation had forced the president to work from home.

Then there was news in 2018 of how a snake had swallowed funds belonging to the national exams body. A man was at a point charged for naming his dog after the president.

Most of them have expressed disgust at the development and backed the call for a probe. Others have switched to joking mode and are making light of the situation.

They don’t even rate citizens, so they’d go as low as packaging the most stupid lie.

Like, can you at least respect me and lie intelligently?

Gorilla swallows N6.8 million
Snake swallowed N36 million.
All my K.O. knows to do is eat, play and bark. Does he think I like pets that much? It’s either you change and join this #NextLevel animal evolution or I may have to consider you for Àsun by Christmas. Mbok ? pic.twitter.com/Joqf4dmHag

EARSHOT: Nigeria under Buhari is so corrupt that event animals have joined the league.

I live in a country where animals are in charge.
Animals eat money like food, they eat it in millions and billions
Snake, Gorilla uses money for break fast, lunch and dinner ??
Welcome to Nigeria NGRPresident
Where Gorilla eats 6.8million naira just like that. pic.twitter.com/bl8IGkZb7P

The animal kingdom is on a swallowing spree. But in Nigeria, they swallow money?