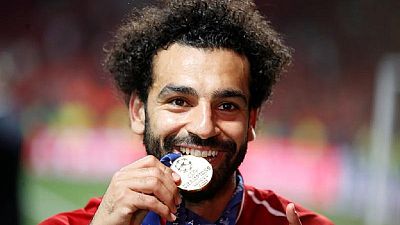 Former Chelsea and Manchester United manager, Jose Mourinho, has given a prescription on how Egypt international Mohamed Salah could compete for the coveted Ballon d’Or gong.

The Portuguese manager who managed Salah during his stint at Chelsea, told Beinsports that the Egyptian could compete for the Ballon d’Or only if he manages to win the upcoming African Cup of Nations, AFCON, with the Pharaohs.

“Salah has to win the African Cup of Nations if he wants to compete for the Ballon d’Or,” Mourinho said in post-match analysis of the UEFA Champions League final last Saturday.

26-year-old Salah’s first medal for the season came with Liverpool, last Saturday, after they beat Tottenham in the final of the UEFA Champions League in Madrid. Salah became the first Egyptian to win the title.

He was a joint goal king winner in the English league, sharing the award with Senegalese team mate Sadio Mane and Gabon international and Arsenal forward, Pierre Emerick Aubameyang. It was the second time in a row he was winning the golden boot.

Egypt, hosts of the 2019 AFCON, are drawn in Group A of the AFCON which starts on June 21. They are drawn along with Zimbabwe, Uganda and DR Congo.

The team will be looking to go one better after finishing runners up in the last edition of the tournament staged in Gabon. The Pharoahs lost in the final to eventual winners Cameroon.

Involved in 100 goals in 104 games pic.twitter.com/PbFCH7TTVa