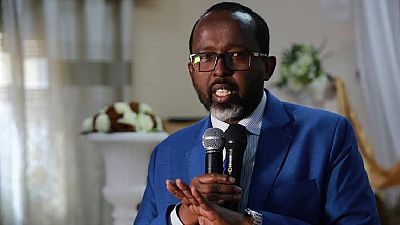 <p>Somalia’s Information Minister on May 1 resigned his position in government citing differences with the federal government under President Mohamed Abdullahi Mohamed Farmaajo.</p> <p>Harun Maruf, journalist with the Voice of America, <span class="caps">VOA</span> Somali Service, said Dahir Mohamoud Gelle confirmed his resignation to the <span class="caps">VOA</span> in an exclusive interview.</p> <p>Gelle was appointed by Prime Minister Ali Hassan Khaire 11 months ago. In Somalia the full portfolio is of Information, Culture and Tourism. </p> <p>The premier’s office has said it has received and accepted the resignation of Gelle. PM Khaire was appointed by Farmaajo who won elections in early 2017.</p> <blockquote class="twitter-tweet" data-lang="en"><p lang="en" dir="ltr"><span class="caps">BREAKING</span>: Somalia Information Minister Dahir Mohamud Gelle has resigned citing “differences of opinions” with federal government leaders – Minister tells <a href="https://twitter.com/voasomali?ref_src=twsrc%5Etfw"><code>voasomali</a> in an exclusive interview. <a href="https://t.co/q6OGeGBmIc">pic.twitter.com/q6OGeGBmIc</a></p>&mdash; Harun Maruf (</code>HarunMaruf) <a href="https://twitter.com/HarunMaruf/status/1123547316479242240?ref_src=twsrc%5Etfw">May 1, 2019</a></blockquote> <script async src="https://platform.twitter.com/widgets.js" charset="utf-8"></script> <p>The resigned minister has been quickly replaced by with Minister of Commerce Mohamed Abdi Hayir Maareeye who held the post in previous government. Maareeye is replaced by Abdullahi Ali Hassan as Minister of Commerce.</p> <p>The Ministry of Information informs the public about government policy plans and implementation and supports improvements to knowledge and education of the public.</p>