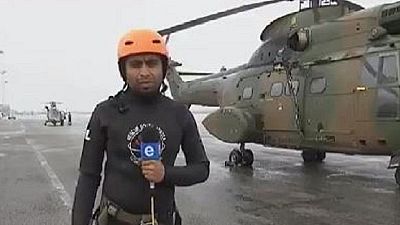 Journalists are normally driven by events. They gravitate towards where the news is. But with that comes challenges, the biggest of which is security.

Journalists who cover conflicts have often been caught up in exchanges with some instances resulting in fatalities.

In mid-March when a tropical cyclone was expected to hit Mozambique, one South African journalist was on his way to the danger zone.

Dasen Thathiah eventually joined a team South Africa government rescue team that headed to the hardest hit Mozambican city, Beira – the city that had at a point been 90% damaged by the cyclone, according to the Red Cross.

In the first part of our interview with Dasen who works for the privately-owned eNCA network, we published his views about getting to Beira, the scene on arrival and the immediate search and rescue efforts that were undertaken by multiple aid agencies.

This is the final part of the interview that extracts his views on the headaches that came with covering a disaster of that scale, he shares a shock story and tips on how journalists could plan for covering natural disasters of such magnitude.

With communication cut, what is your source of internet connectivity?

We drove into a complete blackout. Absolutely no communication at all, save for a sat phone – which we didn’t have. I did manage to borrow one briefly enough to file a quick report with our station.

After a few days, an emergency WiFi connection was set up by an NGO. Even then, it was painfully slow. Uploading a picture could take between 30 minutes to an hour.

What has been its effect on filing reports?

As a journalist, I lived my worst nightmare. Being on top of a breaking story with exclusive footage – but not being able to tell or show a soul.

While the signal was out, I negotiated with the SA Air Force to fly a news package to Maputo for me, and upload it via WeTransfer. This allowed us to be possibly the first to get a full, fresh news package out.

One of the paramedics who travelled with us from South Africa told me a story of a young girl who watched her family wash away in the water.

She remained trapped for a few days afterwards, until she was rescued by air. She’s since been treated, fed and given temporary shelter.

What will be your ideal kit for a journalist covering a disaster like this?