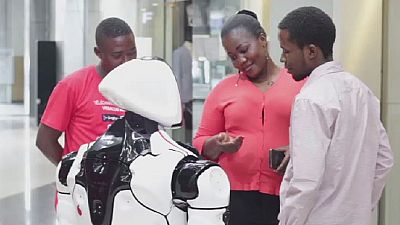 He is the first artificial intelligent robot drawing in the masses at a shopping center in Kinshasa.

Fred who is offering the services of a mobile phone company to users, has been drawing a lot of attention as it toured public places across the capital of the Democratic Republic of Congo.

Many people visiting the robot are fascinated by the artificial intelligence rather than the sales services it offered.

The particularity is that its content and personalization is the result of Congolese ingenuity.

“This robot, it’s incredible. I love him but only a few improvements are needed for him, that would be great. It means, for example, talking directly with people, greeting people. And this one has legs “, Ali, a visitor said.

The mobile phone company that owns the robot aims to reduce the number of agents currently providing the services of answering subscribers’ questions.

The robot was conceptualized in DR Congo but its operating system was created and assembled in Russia.

“ The particularity is that its content and personalization is the result of Congolese ingenuity. We have engineers here at Vodacom Congo who work every day on technological products that can improve subscribers’ present and help them build the future. They worked fundamentally on the content of the robot in order to personalize it “, said

Fred is the first robot to be named as a customer manager by the telephone company.

The title has sparked negative reactions on social media with many terming it a bad idea in a country where official unemployment rate was 43 percent as of 2014.