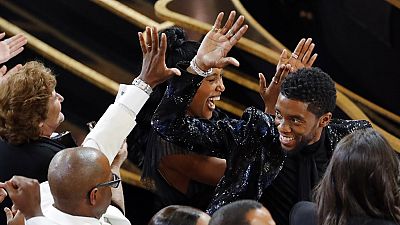 The Black Panther movie, which was celebrated across the African content for creating the first African superhero and the technologically advanced kingdom of Wakanda, on Sunday earned its creators, Marvel Studios, their first Oscar awards.

“Marvel may have created the first black superhero but through costume design we turned him into an African king,’‘ Carter said in her speech.

3️⃣ #Oscars for #BlackPanther: Best Costume Design, Production Design & Score. iamRuthECarter & #HannahBeachler are the first black women ever to win these categories & these are Marvel’s first Oscar statues. I’m so grateful to have been part of this journey. #WakandaForever ??‍♀️ pic.twitter.com/8oxyg0UhVJ

While the coveted Best Picture prize was won by controversial civil rights drama “Green Book”, and Alfonso Cuaron bagged a hat trick of Oscars for “Roma,” his love letter to his childhood in 1970s Mexico City, the list of winners was as diverse as can be.

A child of Egyptian immigrants, Rami Malek was named best actor for his role as Mercury in Bohemian Rhapsody, delivering a moving speech about his story as a first-generation American.

“BlacKkKlansman” is a searing yet sometimes hilarious broadside against racism with the stranger-than-fiction true story of an African-American police officer who managed to infiltrate the highest levels of the Ku Klux Klan.

61-year-old Lee had not won a competitive Oscar despite making films that have captivated audiences all over the world for more than 30 years.

There Oscars had no host for the first time in three decades, after comedian Kevin Hart bowed out amid a backlash over past tweets slammed as homophobic.