**Black Panther fans were treated to the first trailer of the upcoming "Black Panther Wakanda Forever" film over the weekend. The 2-minute long trailer featured Lupita Nyong’o, Danai Gurira and a tribute to late co-star C. Boseman. On Tuesday, the clip already earned more than 22 M views on Youtube.
**

Black Panther fans were treated to the first trailer of the upcoming "Black Panther Wakanda Forever" film. The 2-minute long trailer featured Tems and Kendrick Lamar's voices. The first footage of the sequel of the adventures of the Wakanda people were unveiled at Comic-Con Saturday (23 July 2022) in San Diego, USA. On Tuesday, the clip had already earned more than 22 million views on Youtube.

"Black Panther: Wakanda Forever" is due to arrive in theaters on November 11 and serve as the conclusion to Phase 4. Director Ryan Coogler was on site to preview the highly anticipated film. Coogler paid tribute to leading actor Chadwick Boseman, who died in August 2020.

After the massive success of "Black Panther" in 2018, plans for a sequel were quickly set into motion. But those were altered after Chadwick Boseman unexpected death from colon cancer.

The studio said it would not recast Boseman’s role of T’Challa but very little came out about the film in the years since. Production wrapped in March after several delays, one of which was due to an injury sustained by Letitia Wright, who plays T’Challa’s brainy sister Shuri. Also returning are Lupita Nyong’o, Danai Gurira, Winston Duke and Angela Bassett, but not Daniel Kaluuya. Cast and producers attenting the Comic-Con paid tribute to Boseman's whose, "impact [...] on [the] industry will be felt forever", according to them. 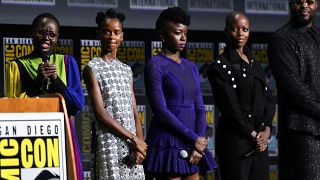 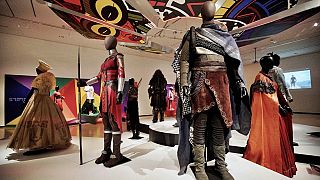