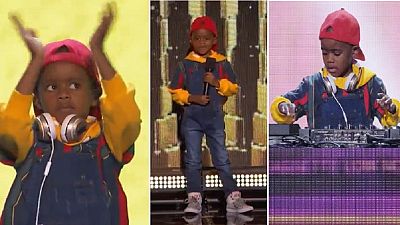 A six-year-old South African disk jockey, Arch Junior, reputed as the world’s youngest DJ has wowed judges and the audience at a top American entertainment program, America’s Got Talent.

A DJ is simply a person who announces and plays popular recorded music.

A two-and-half minute video shared on his Twitter handle, showed him display his djing skills to a teeming audience. He won the South Africa’s Got Talent back in 2015 when he was aged four.

You're six-year-old, you flew all the way from South Africa to take on the best. It's all down to the fifty states now, what a way to start the show.

And this is how an African boy gets the party started on AGT ?????? #AGTChampionspic.twitter.com/n7h8v9HTvc

“You and I need to be talking after this sure because I got some plans for you after this show, trust me,” one judge, Simon said.

He went on to describe him as a total – total little star he absolutely loved. “You’re six-year-old, you flew all the way from South Africa to take on the best. It’s all down to the fifty states now, what a way to start the show,” he added.

One of South Africa’s biggest DJ’s Black Coffee tweeted the video with a comment that read: South Africa to the World. The government won’t be left out on the congratulations as did citizens of Africa’s Rainbow nation.

From South Africa to the world! We are super proud of you little star. (DJ Arch Junior blew the judges away on America’s Got Talent) pic.twitter.com/EoForulZ4h

DJ Arch Junior blew the judges away on America’s Got Talent – even the hard-to-please Simon Cowell. It’s a must watch!https://t.co/LrzIOXWtfQ

Dj Arch Jr is that kid most of us wish we were, growing up. The boy is a gem ?.. ???#DJArch pic.twitter.com/eTHrwYFZSw

Americans don’t waste time, Dj Arch might soon be living in the State.