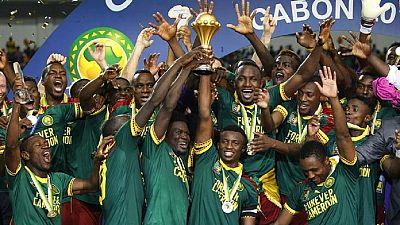 Confederation of African Football (CAF) president Ahmad Ahmad announced on Sunday that Guinea had agreed to host the African Nations Cup (AFCON) in 2025, potentially solving a crisis that ensued when Cameroon was stripped of this year’s AFCON.

Ahmad, who was on a visit to Guinea, along with FIFA president Gianni Infantino, said Guinea’s President Alpha Condé had agreed to a delay in hosting the tournament.

Guinea’s football federation had earlier protested plans by CAF to strip them of the AFCON 2023 hosting rights.

But in November last year, CAF stripped Cameroon of this year’s hosting rights, citing insecurity and infrastructure delays. CAF then proposed that all AFCONs be delayed, with Cameroon hosting AFCON 2021, Ivory Coast hosting the touranment in 2023 and Guinea, being pushed forward to 2025.

READ MORE: Is it time for CAF to revise process of awarding AFCON hosting rights?

While Ahmad also told reporters that Cameroon has agreed to host the Nations Cup in 2021, Ivory Coast, which has been offered AFCON 2023, has lodged an appeal with the Court of Arbitration for Sport against the decision to hand the 2021 tournament to Cameroon.

CAF is set to announce the host for this year’s African Nations Cup on Wednesday, choosing between bids from Egypt and South Africa.