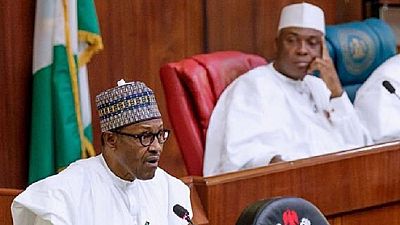 Saraki said the figures in the budget underlined the hopelessness of the document. He was speaking during an event where the main opposition candidate, Atiku Abubakar was meeting with civil society groups.

The budget is the fourth Buhari has presented to parliament since taking office in 2015 but, unlike the others, did not set record high levels of spending as the government seeks to lower debt.

“Yesterday, we all read the 2019 budget, that is a Budget that has no hope for anybody, if you look at the numbers,” Saraki noted.

He also projected a loss for Buhari in the upcoming polls on the back of porr economic management. “February 16th (2019) is the day Nigerians will make their decision on this government, but the business sector voted already, you know how? There’s no investment and jobs are being lost.”

Saraki until July this year was a member of the ruling All Progressives Congress, APC. He defected to the main opposition Peoples Democratic Party, PDP, citing failure by the APC to deliver on its promises.

He contested for the PDP presidential ticket but came a distant third behind eventual winner and former vice president Atiku Abubakar who is Buhari’s biggest challenger at the upcoming polls.

Buhari presented a 8.83 trillion naira ($28.80 billion) budget for 2019 to parliament laying out a plan to drive growth two months before elections.

The spending plan for Africa’s top oil producer assumes crude production of 2.3 million barrels a day, an oil price of $60 per barrel and an exchange rate of 305 naira to the dollar.

Buhari’s handling of the economy – which emerged from its first recession in 25 years this year but remains sluggish – has become a campaign issue.

The main opposition candidate, businessman and former vice president Atiku Abubakar, has criticised Buhari’s economic policies and has promised to double the size of the economy to $900 billion by 2025 if elected.

The spending plan is smaller than the record 9.12 trillion-naira budget for 2018 that he signed into law in June. The budget must still be approved by parliament before it can be signed into law, a process that can take many months.

Nigeria’s economy grew by 1.81 percent in the third quarter of this year, the statistics office said last week. And, in a separate data release days later, it said the inflation rate rose slightly in November to 11.28 percent compared with a year ago.