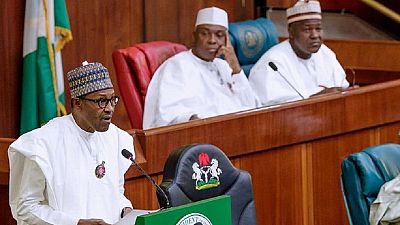 Nigerian President Muhammadu Buhari presented a 8.83 trillion naira ($28.80 billion) budget for 2019 to parliament on Wednesday, and laid out a plan to drive growth two months before elections.

The spending plan for Africa’s top oil producer assumes crude production of 2.3 million barrels a day, an oil price of $60 per barrel and an exchange rate of 305 naira to the dollar.

Buhari’s handling of the economy – which emerged from its first recession in 25 years this year but remains sluggish – has become a campaign issue.

The main opposition candidate, businessman and former vice president Atiku Abubakar, has criticised Buhari’s economic policies and has promised to double the size of the economy to $900 billion by 2025 if elected.

The budget is the fourth Buhari has present to parliament since taking office in 2015 but, unlike the others, did not set record high levels of spending as the government seeks to lower debt. He also received a rowdier reception than in the past, with his statements greeted by boos and cheers.

The spending plan is smaller than the record 9.12 trillion-naira budget for 2018 that he signed into law in June. The budget must still be approved by parliament before it can be signed into law, a process that can take many months.

Nigeria’s economy grew by 1.81 percent in the third quarter of this year, the statistics office said last week. And, in a separate data release days later, it said the inflation rate rose slightly in November to 11.28 percent compared with a year ago.