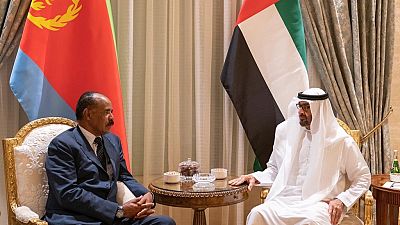 Eritrean president Isaias Afwerki is in the United Arab Emirates where he met the Crown Prince for talks on bilateral ties of cooperation and matters of mutual interest.

Prince Sheikh Mohamed bin Zayed posted a photo on Twitter where he is seen with the Eritrean leader along with other Emirati officials.

“Mohamed bin Zayed receives the President of Eritrea to discuss cooperation and friendship as well as issues of mutual interest,” he wrote.

Afwerki left Asmara on Monday morning, the Eritrea’s Information Minister, Yemane Meskel wrote on Twitter. He had just returned on a historic visit to Somalia and Kenya from last week through to the weekend.

This is the latest round of visits Afwerki has made to the country this year. On one such visits, he was joined by the Ethiopian Prime Minister Abiy Ahmed, with the two being awarded gold medals for their respective roles in the Ethio-Eritrea peace deal agreed in July 2018.

The deal brought an end to decades of hostilities following a deadly and costly border war after Eritrea refused to respect an international border ruling.

Abiy agreed to implement the ruling and flew to Asmara where the two leaders signed a deal. Since then till now, relations have normalized on all fronts with the most recent being the withdrawal of Ethiopian troops from the former militarized areas.

Mohamed bin Zayed receives the President of Eritrea to discuss cooperation and friendship as well as issues of mutual interest pic.twitter.com/4MjjaHfT4E