Buhari tells Nigerians to ignore rumours of his death and replacement

Nigeria’s president, Muhammadu Buhari has dismissed allegations that the real head of state died and was replaced by a lookalike from Sudan.

Addressing Nigerians in Poland, Buhari said the rumours were fuelled by people who wished for his death, when he took sick leave last year.

‘‘A lot of people hoped that I died during my ill health. It is real me… I will soon celebrate my 76th birthday and I will still go strong,’‘ Buhari told Nigerians when asked about Jubril..

I will soon celebrate my 76th birthday and I will still go strong.

Poor ProfOsinbajo, even he had to deal with the rumours — Some people reached out to him to consider them to be his Vice President because they assumed I was dead. That embarrassed him a lot; we discussed it when he visited me while I was convalescing.

Who is fuelling the allegation?

While no evidence has been presented, videos making the claim have still been viewed thousands of times on YouTube and Facebook.

The global news agency, AFP recently tested the claims including photos and videos posted by people who say Nigeria is currently being governed by an impostor from Sudan called ‘Jubril Al-Sudani’.

The rumours questioning Buhari’s identity and speculation of death, have been peddled by several social media users including prominent people, notably Nnamdi Kanu, the leader of the Indigenous People of Biafra (IPOB).

“The man you are looking at in the television is not Buhari… His name is Jubril, he’s from Sudan. After extensive surgery they brought him back,” Kanu told his supporters in 2017.

‘Biafrans’ from Southeast Nigeria are increasingly critical of Buhari, and more likely to spread the allegations of his death and replacement.

Tensions and military operations in the region have increased following a spike in pro-Biafran protests that were sparked by the arrest in October 2015 of IPOB leader, Kanu.

The prevailing tensions in the southeast come nearly half a century after a previous unilateral declaration of an independent Republic of Biafra sparked a 30-month civil war that left more than one million dead.

Buhari is seeking re-election in next year’s poll, and will be facing stiff competition from former vice-president, Atiku Abubakar.

Abubakar, who named Peter Obi, a former southeastern governor, as his running mate in October, will be hoping to win the Igbo vote, as he seeks to unseat the incumbent. 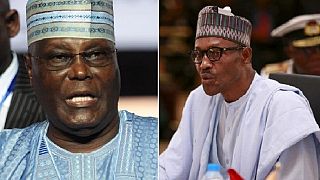