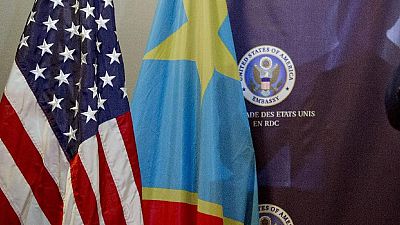 Congolese authorities have confirmed that a security threat against U.S. government facilities that has kept the U.S. embassy closed all week is real and serious.

The U.S. embassy in the capital, Kinshasa, has been closed since last weekend due to what it says is “credible and specific information of a possible terrorist threat”. It has declined to elaborate.

Earlier in the week, Democratic Republic of Congo’s government spokesman said U.S. officials were keeping the government in the dark and questioned whether the threat was an “imaginary alert”.

It’s clear these threats are serious. The U.S. and our services have serious information regarding the validity of the threat.

But in a news conference on Friday, Foreign Minister Leonard She Okitundu, who met with U.S. Deputy Assistant Secretary of State Elizabeth Fitzsimmons on Wednesday, said the threat was real.

“It’s clear these threats are serious. The U.S. and our services have serious information regarding the validity of the threat,” he said.

“For the moment, there is coordination between the security services of the U.S., regional countries and Congo.”

He declined to provide any further specifics.

Threat from ADF in Congo Brazaville

U.S. officials have remained tight-lipped in public about the nature of the threat, but have informed foreign diplomats that the embassy closure is due to the arrest last week of a cell of Tanzanian jihadists from a Ugandan Islamist group called the Allied Democratic Forces (ADF), two diplomats told Reuters.

U.S. officials believe the cell members were planning to strike U.S. government facilities in Kinshasa, which lies just across the Congo River from their base in Congo Republic’s capital, Brazzaville, the diplomats said.

However, the diplomats did not know where the arrests took place nor how many cell members were arrested. Congo Republic’s government spokesmen said he had no information on the matter.

Any such plot would mark a dramatic shift for the ADF, a militia that operates primarily in eastern Congo, nearly 2,000 km from Kinshasa, and which has never carried out attacks outside of eastern Congo or Uganda.

A third diplomat, who was also briefed on a purported ADF threat to U.S. facilities, expressed scepticism about the threat, which the diplomat said was flagged to U.S. officials by Congo’s military intelligence service.

Who is backing ADF?

U.N. and independent experts have for years been unable to confirm allegations from the Ugandan and Congolese governments that the ADF has links to Somalia’s al Shabaab or other jihadist groups.

But a report by the Congo Research Group and Bridgeway Foundation earlier this month found the ADF had received money in recent years from a financier linked to Islamic State, suggesting tentative ties with foreign jihadists, including in Tanzania and other east African countries.