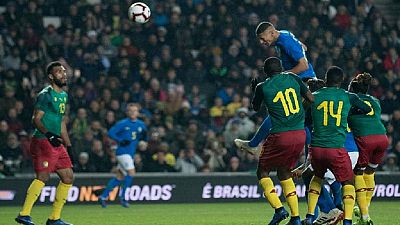 Brazil beat Cameroon by a lone goal to nil in a friendly game played on Tuesday evening. The game was played at the Milton Keynes Dons stadium in the United Kingdom.

The Brazilian winner was scored by Richarlison who reacted fastest to a corner kick to head past the Cameroonian goalie.

The goal came minutes before the first half came to an end. Try as the Indomitable Lions did, they could not get an equalizer.

?? Richarlison scores for Brazil to put them 1-0 up against Cameroon just before half time ? pic.twitter.com/uOFqUPEo5B

Brazil named a strong starting XI with Neymar as captain, unfortunately the Paris Saint Germain forward was stretchered off after eight minutes. The line-up also had Liverpool’s Roberto Firminho and Chelsea’s Willian with Ederson in the post.

The most known player who started for Cameroon was Maxin Choupo Moting of PSG who was deployed by manager Seedorf to play behind forwards Bahoken and Ekambi.

The last competitive fixture between the two sides was at the 2014 World Cup in Brazil with the hosts dishing a 4 – 1 drabbing to the Cameroonians.