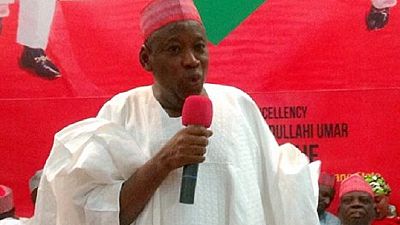 A Nigerian governor has sued an online portal and its publisher over viral videos that shows him purportedly receiving dollar bribes from contractors in the state.

Abdullahi Ganduje, governor of north-central Kano State through his lawyers filed the suit at a High Court, the portal in question, Daily Nigerian, reports.

The suit filed is among others: seeking the court to restrain the portal and its publisher, Jafar Jafar, from further publishing what he called “defamatory doctored video clips.”

Ganduje, a former deputy governor of Kano was elected for the first of two-terms in 2015. He is currently contesting for a final term when elections are next held in early 2019.

He has appeared in several video clips circulated by the Daily Nigerian receiving bribe, allegedly amounting to about $5million from contractors in the state. The portal quotes contractors as saying Ganduje personally receives from 15 to 25 percent kickbacks for every project executed in the state.

The state legislature opened a probe into the videos and reports with Jafar Jafar honouring an invitation to testify. The governor sent an representative when he was invited. He denied ever receiving a bribe in his life. The probe has, however, been halted by a court order.