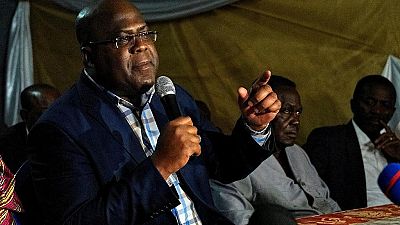 The opposition in Democratic Republic of Congo have said the government is ‘not ready’ to codnduct the December elections, a day after the army handed over 150 trucks and a dozen aircraft for use by the electoral commission.

“One hundred fifty trucks can’t cover our vast national territory which doesn’t even have the road infrastructure,” said Augustin Kabuya, spokesman of the main opposition Union for Democracy and Social Progress (UDPS).

The conflict-ridden DR Congo sprawls over 2.3 million square kilometres (890,000 square miles), making it the largest country in sub-Saharan Africa, some two-thirds the size of Western Europe.

We know (however) that... Corneille Nangaa is not ready to organise the elections on December 23.

It was a PR stunt

Kabuya said the handover of the trucks, planes and helicopters, conducted with great fanfare on Monday, was “staged” to lend international credibility to the elections.

“We know (however) that… Corneille Nangaa is not ready to organise the elections on December 23,” Kabuya told AFP, referring to the head of the Independent National Electoral Commission (CENI).

During Monday’s ceremony, the Congolese authorities said the vote, postponed in 2016 and again last year, would go ahead without help from the international community.

Previous elections, in 2006 and 2011, took place with material and logistical support from the UN mission to the DR Congo known as MONUSCO.

However relations between MONUSCO, the world’s largest peacekeeping operation, and Kabila’s government have long been strained.

Kinshasa has repeatedly demanded the winding down of the mission, whose military observers were deployed in 2000 during the Second Congo War. The force now counts more than 15,000 troops, 1,000 police and 2,500 civilians in its ranks.

ALSO READ: Kabila confronts the opposition and the United Nations

The presidential, legislative and municipal elections, set for December 23, will notably yield a successor to Kabila, who is barred by term limits from seeking re-election.

Kabila, 47, has been in power since 2001. His second and final elected term in office ended nearly two years ago, but he stayed in office thanks to a caretaker clause in the constitution.

Months of feverish speculation over his intentions, marked by protests that were bloodily repressed at a cost of dozens of lives, ended in August when he threw his weight behind Emmanuel Ramazani Shadary, a hardline former interior minister.