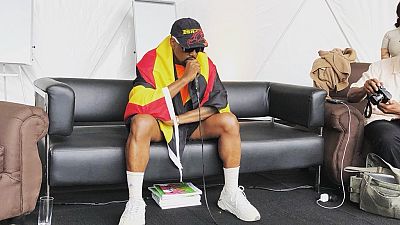 He arrived in Uganda along with his wife, Kim Kardarshian West and their daughter North West. He has since met with President Yoweri Museveni today at State House.

In a video announcing his trip last week, Kanye said: “… we are going into the deep sea’, we haven’t seen 90% of our world. We are going to Africa -Uganda.”

Where Team Kanye is based

Team Kanye is based at the Chobe Lodge Murchison National Park located in northern Uganda. Reports indicate that the park is under lockdown and security remains very high.

A photo and video of a rapping Kanye wrapped in the Ugandan flag has since been widely shared across social media.

Okay, so Kanye West is finally in Uganda! The national park is on lockdown, studios have been built in the game park wilderness and Incase you're hoping on a selfie or sighting … Forget it… Security detail is very VERY tight.

The flags were already out because the Cranes of Uganda were involved in a cup of nations qualifier against Lesotho. The team beat the visiting team by three unanswered goals.

Studio built in middle of the park

According to an entertainment site, Track House, a huge tent studio had been built in the park for the team to work in.

Time lapse of Kanye West's studio set up in Uganda

I welcome American entertainment stars Kanye West and KimKardashian to Uganda. I held fruitful discussions with the duo on how to promote Uganda's tourism and the arts. I thank Kanye for the gift of white sneakers. Enjoy your time in Uganda. It is the true Pearl of Africa. pic.twitter.com/BO0iD0sFCP

When Kanye announced his tour

In an interview with popular entertainment site TMZ last week, Kanye said he needed to “go and grab the soil” so that his fans can “hear nature while we’re recording.”

The visit of Kanye & KimKardashian West to Uganda is not only an affirmation of Uganda’s rich diversity of fauna & flora , it is also a validation of government’s efforts to position Uganda as the Prime holiday destination for tourists. #VisitUganda #KanyeWestInUganda . pic.twitter.com/8B6P70Zwj0

#KanyeWestInUganda ▶️Ye, KimKardashian, bankulli and team stopover during a game drive as they continue to enjoy the scenery of Murchison Falls National Park #TourismUganda pic.twitter.com/jhcczIn4Re

.kanyewest is in Uganda and particularly Chobe Safaris Lodge to record what will become Yandhi, his tenth album. He is here with his wife KimKardashian

Kanye West came to launch the Yeezys in Uganda pic.twitter.com/PKIwdTbADL