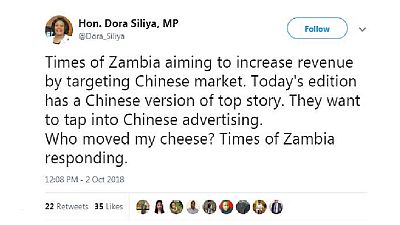 The Zambian government has officially responded to why and how a state-owned newspaper published an article in Chinese.

The Times of Zambia published a Chinese version of its Tuesday October 2 lead story which reported about President Lungu’s declaration that relations with the eastern or western powers will be based on national interest.

The idea amazed and annoyed a cross-section of Zambians who expressed their outrage via social media portal, Twitter.

But Information Minister and chief government spokesperson Dora Siliya gave an explanation via Twitter. She said the move was a business decision meant to boost readership and tap into Chinese ad market.

“Times of Zambia aiming to increase revenue by targeting Chinese market. Today’s edition has a Chinese version of top story. They want to tap into Chinese advertising. Who moved my cheese? Times of Zambia responding,” she tweeted.

With Zambia already recognizing seven languages, a local portal, Mwebantu asked if Chinese had been drafted as the eight language.

To that, the Minister responded: “I think you have to separate sentiments from the business decisions by Times of Zambia which is struggling and wants to tap into a new market. You will notice that the story in Chinese is not isolated but a translation of top story in English. Business responds to environment.”