Twitter users call out pundits who gave up on Tiger Woods 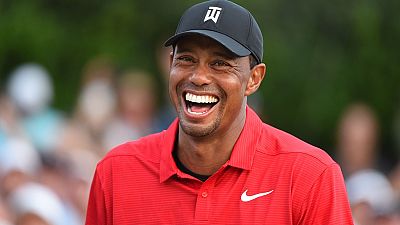 Tiger Wood’s emotional win on Sunday, that saw him capture his first title since 2013 with a two-stroke triumph at the Tour Championship in Atlanta, has disproved his critics and acclaimed pundits who said he was washed up at 42.

Tossing aside five years of career-threatening injury woes, Woods reasserted his status as the best frontrunner in the history of the sport, leading throughout the final round and finishing at 11-under-par 269 at East Lake.

With the massive gallery chanting his name as they stampeded the final fairway in scenes reminiscent of British Opens of yesteryear, Woods moved within two victories of Sam Snead’s all-time record of 82 PGA Tour titles.

I was having a hard time not crying coming up the last hole.

“I was having a hard time not crying coming up the last hole,” he said.

“All of a sudden it started hitting me I was going to win the tournament.

After carding 71, Woods walked off to a big kiss from girlfriend Erica Herman and a hug from agent Mark Steinberg as security tried to keep the frenzied fans at bay.

On Twitter, as Tiger Woods was congratulated by his fiercest critics, his fans were quick to pint out the hypocrisy of those who wrote off the athlete.

Tiger Woods wins for the first time since 2013.

He tried but he probably doesn’t mean it pic.twitter.com/0c8pUD1kuT

They have been loving him. Don’t like how dismissive so of them were and today they are joyful praising Tiger as if they always believed. Particularly the black analysts that have been so harsh. They acting so cool on Twitter ?

#TigerWoods has roared his critics silent. A perfect example that when everyone tells you you're done, stay up on your faith! Well done Tiger!

The victory capped off a season that started with questions over whether Woods, now 10 years removed from his 14th major title, would even be able to play a full schedule after undergoing spinal fusion surgery in April 2017.

The win preserved Woods’s perfect record of never having lost after leading by three shots or more going into the final round, a record he extended to 24-for-24.

With his 43rd birthday approaching in December, Woods remains a long shot to win five more majors to overhaul the career tally of Jack Nicklaus even if the Golden Bear himself was not ruling it out.