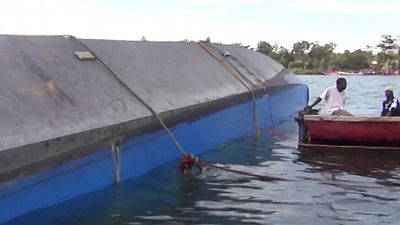 Uganda’s president Yoweri Museveni and Kenya’s Uhuru Kenyatta have sent condolences to their counterpart John Pombe Magufuli and the people of Tanzania following the loss of over 100 lives in the ferry accident that happened on Thursday.

The ferry MV Nyerere capsized on Thursday afternoon just a few metres from the dock on Ukerewe, the lake’s biggest island, which is part of Tanzania. Initial estimates suggested that the ferry was carrying more than 300 people.

The country’s police chief Simon Sirro said on Friday that the number of people dead from the disaster has risen to at least 136.

President Magufuli has since ordered for the arrest of all officials involved in the supervision and operation of the capsized ferry.

Chief secretary John Kijazi who announced the arrests in Dodoma on Friday, added that Magufuli had ordered for three days of national mourning.

‘’ On behalf of the people of Uganda and on my own behalf, I express our condolences to H.E J. Pombe Magufuli and the people of the Republic of Tanzania upon this loss,’‘ read part of Museveni’s tweet sent out on Friday afternoon.

I have heard of the tragic accident on Lake Victoria where the MV Nyerere ferry capsized, drowning over 100 people. On behalf of the people of Uganda and on my own behalf, I express our condolences to H.E J. Pombe Magufuli & the people of the Republic of Tanzania upon this loss.

Our deepest condolences to the families and loved ones of the victims of the Lake Victoria ferry accident. Our thoughts are with you. We cannot thank the rescuers enough.

I express our solidarity and support with our brothers and sisters in Tanzania??, with whom we’ve been friends and have deep ties, and to assure them that we will lend every needed support.

I send sincere and heartfelt condolences to families who lost loved ones in the MV Nyerere tragedy in Tanzania. I mourn with the people of Tanzania at this very difficult moment. May God grant peace and strength to the families, the care givers and the Tanzanian nation.

Thirty-seven people had been rescued from the sea, Jonathan Shana, the regional police commander for the port of Mwanza on the south coast of the lake told Reuters by phone on Friday.

Shana said more rescuers had joined the operation when it resumed at daylight on Friday. He did not give exact numbers.