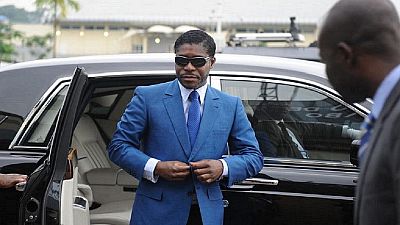 Until his elevation to the post of veep, he had served as Agriculture minister of the oil-rich nation. He is reputed for his lavish and flashy sporty lifestyle which has always reflected when he is in the news.

His father is usually tagged as Africa’s longest serving president – he is going in on four decades in charge. Political watchers say elevating his son to veep means he most likely will take over when daddy decides to step down.

Teodorin has become known with sports cars, high-end residential apartments and fancy watches. He is no stranger to having his possessions seized.

The latest installment has seen his entourage blocked by authorities in Brazil over claims that they were carrying as much as over $16m – $1.4m cash and watches worth $15m.

But before Brazil the vice president has suffered asset seizures and a court case in Europe. France, Switzerland, Netherlands and the United States have all had cause to clamp down on his properties.

Six years ago, France issued an arrest warrant for him and seized his Paris mansion and several of his luxury cars.

Two years ago, 11 luxury vehicles and sports cars belonging to Teodorin were confiscated by Swiss authorities. The move at the time was part of a preliminary investigation into alleged corruption.

The investigative journalist who broke the story, Francois Pilet, said the October 31, 2016 seizure took place in the Swiss capital, Geneva.

According to spokesman of the Geneva prosecutor’s office, Henri Della Casa, the cars belonging to Teodorin were impounded specifically in the freight zone at Geneva’s airport. They included a Bugatti Veyron, a Porsche 918 Spyder and several models of the Ferrari F12.

The court in the French capital convicted him for embezzling public funds and laundering the proceeds in France. The Paris court also seized his assets in France valued at over $115 million.

He was was handed a three-year jail term over the infamous ‘ill-gotten assets’ saga. The court also asked that he pays a fine amounting to 30 million euros.

He arrived with a government plane in Brazil last weekend but the plane was not on official government trip according to reports.

On board were luggages that contained materials worth over $16m – more than $1.4m cash and watches valued at $15m. One bag would not be searched because it had a diplomatic label. Ten members of his entourage were detained by police and revenue authorities.

The Equatorial Guinea embassy in Brazil said the money was for some business that the vice president was due to transact in an onward trip whiles the watches were for his personal use. He was in Brazil for medical reasons.

Records indicate that other countries including the United States and The Netherlands have in the past seized millions of dollars of his property believed to have been acquired with state funds.