Former warlord and Congolese Vice President Jean-Pierre Bemba, excluded from the presidential election in the Democratic Republic of Congo, declares himself ready to support a single opposition candidate, in an interview with the weekly Jeune Africa to be released Monday.

If there were to be a call to boycott the elections, “it would not be my personal decision, but that of the opposition, we are not there,” he added.

The interview comes as the International Criminal Court (ICC) has to rule Monday on the sentence against Mr. Bemba, sentenced for bribing witnesses.

“It’s the judges’ case and I’m challenging it, but I will not comment on it, the ICC forbids me to do it,” he said.

This conviction by the ICC was invoked in the DRC by the electoral commission, then the constitutional court, to invalidate his candidacy for the presidential election.

Mr. Bemba denies that the purchase of witnesses is corruption: “In the Congolese penal code, corruption and bribery are defined by two different pieces of law”.

“The Kinshasa regime has chosen its own opponents,” he accused.

Mr. Bemba was acquitted in June on appeal by the ICC of 18 years imprisonment for war crimes and against humanity, for abuses attributed to his militia in the Central African Republic in 2002-2003.

“I have never had the proof, if that had been the case, I would have taken sanctions,” he replied, questioned about the abuses of his militia present in the Central African Republic to support the former president Ange-Felix Patassé. 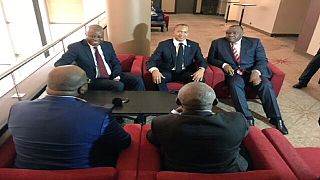