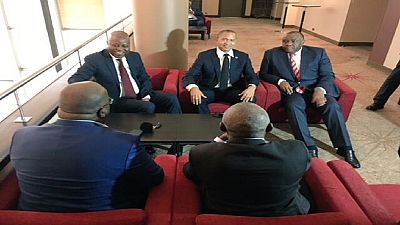 Opposition leaders from the Democratic Republic of Congo issued a joint statement on Wednesday urging President Joseph Kabila’s government to respect the rules for a long-delayed presidential election or risk “chaos” in a country mired by poverty and political rivalries.

The appeal was made in Brussels by presidential candidates Felix Tshisekedi and Vital Kamerhe, along with fellow opposition leaders Jean-Pierre Bemba, Moses Katumbi, Adolphe Muzito and Antipas Mbusa.

They warned the national election committee and Kabila’s government to heed their demands or be “held responsible for the chaos and consequences that will result from organising a parody of an election”.

Their demands are contained in a joint statement ahead of the December 23 elections.

The statement objected to striking voters from the electoral rolls who cannot be identified by finger prints, which they said amounted to 10 million people in a country with an estimated population of nearly 80 million.

The opposition leaders pleaded for inclusive elections and for the UN force in DR Congo, MONUSCO, to be allowed to take part in the logistics for the vote.

The opposition leaders also demanded the “effective participation of candidates excluded or invalidated for political reasons”.

Former warlord Bemba was one of six presidential hopefuls excluded from the vote by the election commission.

He appealed the decision but the country’s Constitutional Court upheld the ban, citing his conviction by the International Criminal Court (ICC) for bribing witnesses at his war crimes trial.

Also struck from the race is Muzito, a former prime minister.

The exiled Katumbi, the former governor of the Katanga province, has been prevented from returning to the country to run in the race, even as a coalition backs him.

A full list of candidates will be announced on September 19.

Bemba has accused Kabila of trying to hand-pick a successor by eliminating serious rivals.

The former Belgian colony has not seen a peaceful transition of power since 1960.

Kabila, in power since 2001, finally said he will not run again after keeping silent on the issue for months, fuelling tension and deadly unrest in the volatile central African nation.

The president, whose second and final term ended two years ago, has named his former interior minister Ramazani Shadary as his chosen successor.

Bemba declared his candidacy when he made a triumphant return home from Belgium after the ICC based in The Hague acquitted him of war crimes charges.

However, Bemba and five co-accused were convicted on appeal of bribery, corruption and coaching 14 defence witnesses in his main trial. He is to be sentenced later this month.