Liberia honour VAR: Why Weah is on and offside with Wenger medal 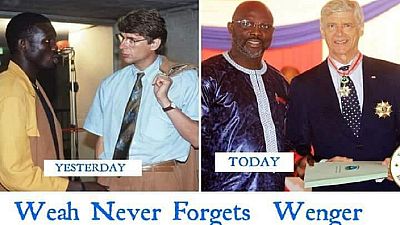 One thing was clear, that the criticisms were not going to have the potency to flag the event offside. So it took place in Monrovia, August 24, as Weah decorated the Frenchman man who discovered him way back in 1988.

Back home, the argument was that giving the highest national honour had to reflect the magnitude of the recipient’s contribution to the country. That Wenger had undoubtedly done so much for Weah as a person and not Liberia as a country.

Others averred, much as the president could award honours, the category he had chosen to confer on Wenger reflected a personal will than that of the Liberian people.

Then a minister stepped in to explain / justify why Wenger and why the highest national award. In summary, he said the award was even beyond Wenger’s impact on Liberia but on Africa as a whole – given the opportunities he gave African players whiles coaching.

Information Minister Eugene Nagbe in response to criticisms of the award told the BBC the award was not only about Wenger’s impact on Weah alone but a way to recognize that the Frenchman had “contributed to sports in Africa and has given many Africans opportunities.”

For those that see the move as justified, they argue that the president is well within his powers to confer an award on any individual he deems fit. That he would hardly have unilaterally done so without the agreement of an advisory council.

Again, they advance the argument that long before Ellen Johnson Sirleaf and Leila Gbowee were awarded the Nobel Peace Prize, Liberia was best known for its protracted deadly and devastating civil war.

The days when any glimmer of hope and stability was shattered with the taking of arms, when Liberia’s internal crisis threatened an entire sub-region principally Sierra Leone, when nationals were scattered around West Africa as they fled the war back home.

In those days, there was the ‘patriotic’ young man called George Weah, a young man who gave Liberians something to rally around. He brought football to citizens home and abroad.

Weah is on record to have singlehandedly financed travels of the national team across Africa as they engaged in qualifiers for tournaments or even to play in friendly games – he was in essence the main financier of national team football in Liberia.

Winning international accolades over the time also brought Liberia to the fore and he took the opportunity at every turn to file for peace back home. Weah knew that his journey started three decades ago thanks to Wenger signing him for Toulouse.

The two went their separate ways as Wenger took on Arsenal years later whiles Weah travelled around Europe making a name for himself.

So the argument about Wenger’s impact on Liberia for some, is tied to Weah’s overall impact on the country especially through the years of turmoil. For others, Weah could probably not convince any other president to award Wenger that kind of medal.

The final whistle has since been blown and Liberia’s national honours has in it that Arsene Wenger is a Knights Grand Commander, Humane Order of African Redemption (KGC-HOAR) thanks to President George Weah.