Why Ugandans have nicknamed their president 'Bosco Katala' 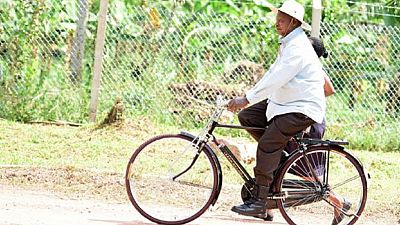 Uganda’s president Yoweri Museveni on Sunday made reference to a nickname that has lately been used by several social media users when refering to him.

The name ‘ Bosco Katala’ has over the last month gained traction as a derogatory term used to refer to what the young people on social media see as Museveni’s backward national policies and personal enrichment at the expense of the taxpayer.

Katala is a word from the widely spoken Luganda local language, that means ‘someone who is unsophisticated or a socially awkward person, usually from the village’.

First of all, I'm not Bosco.

In his address to the nation on Sunday, which covered several issues including the fight against corruption, the recent political events in Arua, allegations of torture among others, local media reported that Museveni started by giving a disclaimer.

‘‘First of all, I’m not Bosco (Katala),’‘ Museveni said, which left journalists at the news conference and Ugandans on social media amused.

The origin of the name Bosco stems from a commercial that was released by the biggest telecommunications company in Uganda, MTN, promoting the use of cashless transactions using mobile money.

The advert ‘tells the story of Bosco’, an middle-aged Ugandan man who comes to the city, and goes shopping at a supermarket in a fancy shopping mall, where he is shown how to pay using mobile money.

The gentleman in the advert, who has since become a sensation in Uganda, is 35 year old Kasirye Siraje. He is popular on the streets, in Ugandan banks, television studios and even has his own Twitter account.

Why do Ugandans insist on calling Museveni, ‘Bosco’

Following the release of the advert about three weeks ago, Ugandans immediately likened Bosco to president Museveni.

As part of his poverty alleviation campaigns around the country, Museveni has used a bicycle to fetch water and used bottles to irrigate crops in a bid to demonstrate to Uganda’s smallholder farmers that they can use resources available to them to profit from farming.

He has also handed sacks of money to youth groups as a way to support entrepreneurship and to stop unemployment.

Ugandan President Yoweri Museveni handed over $100,000 to some youths. It was literally a sack of money! pic.twitter.com/eMrvPxX52J

Satirised clips of the president were shared online showing the president fetching water for irrigation using his bicycle, and carrying sacks of money, all played out against the music bed of Bosco’s story.

Is it true that the mtnug Bosco advert is the new name and personality of President Museveni? UgandaMediaCent pic.twitter.com/Vzxu16yNTE

At last I have found the real meaning of Bosco and why people think M7 is BOSCO
B-BRUTALITY
O-OPPRESSION
S-SELFISHNESS
C-CORRUPTION
O-OLIGARCH_ISM
I find all the above to be true
MUSEVENI OUT.

The country’s telecommunications regulator recently refuted allegations that it had banned the broadcast of the Bosco advert after some DJs said they were harassed by police for playing it.

The DPC appologized for the inconvenience his man had caused me. He also stated that the Ad has not been banned and its within my rights to play it. I also got to meet Kira Road Police OC and turns out the officer that wanted me in a cell wasnt the OC. https://t.co/FP2wpxHKAp