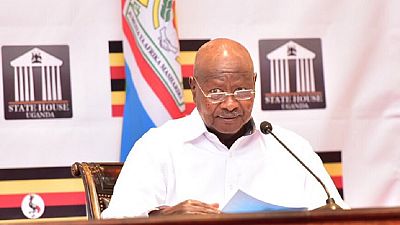 Ugandan president Yoweri Kaguta Museveni on Saunday announced a direct toll-free line to his office as part of efforts to combat corruption in the country. He also outlined a three-pronged strategy to curb rising insecurity.

Museveni, in an address to the nation identified corruption as the first of six areas of weakness in his government and said he was committed to rooting it out.

“… there are six areas of weakness that we must address. The first is corruption by Government officials who take bribes. These are easy to uproot.

By the last, we mean cameras, drones and other means. All those areas are being strengthened in the towns as they were in the countryside.

“Just get information on them and pass it on to the toll-free number 0800-100770 belonging to my office. This is in addition to a unit I announced during the June 2018 State of the Nation address. You will see what we shall do with them,” he said.

On the subject of insecurity, the president said he had asked for 24,000 Local Defense Units (LDUs) to be mobilized stressing that they were going to be armed to maintain security.

His comments comes on the back of the latest high-profile murder that saw a top police officer gunned down on Saturday evening. Afande Muhammad Kirumira, was shot dead with a female occupant in a car outside his home in the town of Bulenga.

“The third method is to deploy more technical means in detecting and witnessing possible crimes. By the last, we mean cameras, drones and other means. All those areas are being strengthened in the towns as they were in the countryside.”

Museveni’s address also cut across several issues of national and global concern. He went at lengths to describe Uganda’s diplomatic relations with countries in the West after justifying the role played by China on the continent.