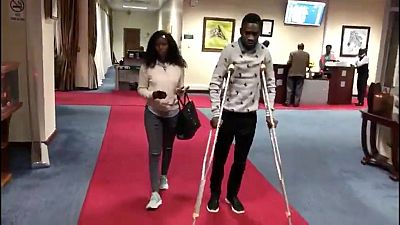 Ugandan legislator Robert Kyagulanyi, commonly known as Bobi Wine has narrated a horrific tale of torture, merciless beating and inhumane treatment that he was taken through at the hands of state operatives, over the past three weeks.

‘‘They beat me, punched me, and kicked me with their boots. No part of my body was spared. They hit my eyes, mouth and nose. They hit my elbows and my knees. Those guys are heartless!’‘ read part of the statement that the legislator posted on his Facebook page.

Bobi Wine was arrested on August 13, after he campaigned for an independent candidate in a by-election in the West Nile town of Arua.

Those guys did to me unspeakable things in that vehicle! They pulled my manhood and squeezed my testicles while punching me with objects I didn’t see.

He has since been charged with treason, after state argued that a section of his supporters stoned the convoy of president Yoweri Museveni who was also in Arua to campaign for the ruling party candidate.

Bobi Wine’s detention by the military, that lasted more than a week, sparked protests in Uganda and all over the world, as the hashtag #FreeBobiWine trended on social media.

His lawyers and family who were able to see him after a week of detention told Ugandans that Bobi Wine had been badly tortured and could hardly walk or talk.

Several government statements including from the president insisted that Bobi Wine was fine, but when he was eventually produced in court, images and videos showed that he was badly injured, and could only walk with the aid of crutches.

Bobi Wine described government statements on his condition as ‘absurd’.

The arrest in Arua

In his statement, Bobi Wine confirms that he believes he survived an assassination attempt in Arua, explaining that he was seated in the co-passenger seat of his Tundra vehicle moments before his driver was shot dead in that same seat.

He goes ahead to say the Special Forces Command (SFC) soldiers who carried out the operation were specifically looking for him, and that when they finally found him hiding in a hotel room, they hit him on the head with an iron bar.

‘‘As soon as they saw me, they charged saying ‘there he is’ in Swahili.’‘

The detention and torture

Bobi speaks of inhumane treatment he was subjected to in Arua, after his arrest by SFC soldiers.

‘‘Those guys did to me unspeakable things in that vehicle! They pulled my manhood and squeezed my testicles while punching me with objects I didn’t see,’‘ read part of Bobi Wine’s statement.

‘‘They forced my head below the car seat so as to stop me from shouting. Then they hit my back and continued to hit my genitals with objects. The marks on my back, ankles, elbows, legs and head are still visible…’‘

Bobi Wine, who narrates his recollection of visits from his family and lawyers, said some of the statements given by government officials who visited him mad him sad because they were ‘dishonest’.

Several ruing party Mps including the deputy speaker of parliament, Jacob Oulanyah, told Ugandans Bobi Wine was not as gravely injured as portrayed in the media.

Bobi Wine concludes his long statement by pledging to extend ‘a vote of thanks to the world for the overwhelming support and comradeship’.

‘‘I will also talk about what I think we must do together to continue this struggle for liberty and freedom.’‘

He also commends the #FreeZaake advocacy that has resulted in the bonding of another injured legislator, Francis Zaake, who is to travel to India for specialised treatment.