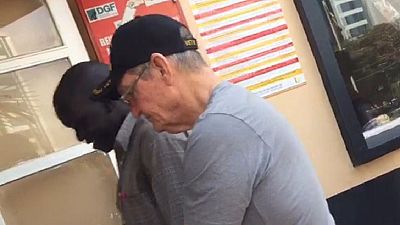 An American citizen who was arrested two weeks ago over charges of assaulting a hotel worker in the Ugandan capital Kampala, has been granted bail.

Jimmy Taylor was arrested by Uganda Police after videos circulated on social media showing him slapping and pursuing a male employee of Grand Imperial Hotel, whom he accused of ‘disgracing Jesus’.

Local newspaper, Daily Monitor reported that the 69 year old appeared before the Buganda Road Chief Magistrates Court on Friday, where he was charged with assault.

Prosecution led by Patricia Chingtho said on August 17, at Grand Imperial Hotel in Kampala, Taylor a resident of Arkansas, US, unlawfully assaulted Mr Franco Ssamanya, a staff member of the hotel, occasioning him physical harm.

Taylor, who says he is an ex-US marine and missionary, pleaded not guilty to the charges.

He then applied for bail, which was granted after prosecution did not object, saying the accused had presented credible sureties.

“The accused is hereby granted non-cash bail of Shs1 million ($265). Both his sureties are bonded at the same amount non-cash,” Mukanza said.

Taylor, whose videos sparked outrage on social media in Uganda and across the region, reportedly told police he attacked the hotel employee because he had suffered stress.