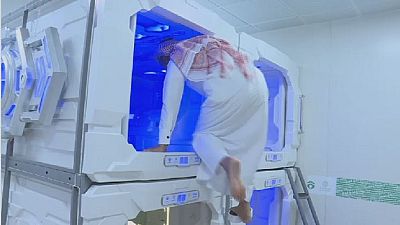 The famous ‘nap pods’ in Japan has made its way to Saudi Arabia for pilgrims attending this year’s hajj in Mecca. The pilgrims will have these tiny air-conditioned cabins fitted with mattress to get some rest.

On Sunday 19 August, Muslims begun their annual pilgrimage to Mecca to seek spiritual strength. These ‘ nap pods’ will enable pilgrims to rest for three hours during the period.

According to Mansour Al-Amer of the Haji and Mutamer gift charitable association, these ‘nap pods’ are fitted for those who can not afford hotel bills.

(We tested) 12 capsules during the month of Ramadan, they were used by 60 people a day for 30 days, that's a significant number of beneficiaries.

‘‘Pilgrims are guests of God and to serve them is an honor, as we think of ourselves, we think of pilgrims and how they can get comfort when they perform their rites. Capsules are one idea among others from our association”, Al-Amer said.

The Cabins are 2.64 m² and 1.2 m high. They are made of fiberglass to protect from the sun and can be arranged on top of each other to save space.  Users can adjust the temperature and the facility also comes with essentials for comfort living.

“(We tested) 12 capsules during the month of Ramadan, they were used by 60 people a day for 30 days, that’s a significant number of beneficiaries”, he added.

Some two million Muslim worshipers from around the world are expected at this year at Hajj, one of the five pillars of Islam.

This year, organizers launched an initiative called “smart hajj”, with applications to help pilgrims find their way or get emergency medical care from the Saudi Red Crescent.

The Ministry of Pilgrimage also manages the “Manasikana” application which provides translation for faithfuls who speak neither Arabic nor English.

These steps coincide with a major modernization plan underway in Saudi Arabia, one of the most conservative countries in the world.  In June, Ryad lifted the ban on women driving, a change inspired by Crown Prince Mohammed bin Salman.

But the Saudi Kingdom has tightened its grip on dissidents, as evidenced by the arrest of a dozen human rights activists in recent weeks. Some have since been released.