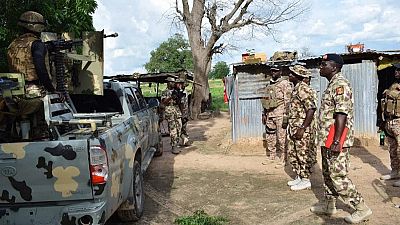 Days after staging a revolt in northeastern Nigeria’s Borno State, troops engaged in Boko Haram combat have been tasked to remain discipline and to channel their grievances via the right quarters.

The call was made by current Theater Commander for the anti-insurgency combat ‘Operation Lafiya Doole.’ According to Major General Abba Dikko, the Boko Haram combat could easily scuttle in the face of indiscipline.

General Dikko gave the charge today in his address to troops during an operational visit to Forward Operational Base at Delwa in Konduga Local Government Area of Borno State, the Army said in a statement.

Your welfare in this operation is paramount to me as your Theatre Commander.

”Your welfare in this operation is paramount to me as your Theatre Commander,” he added. He also assured the troops of their rotation, soon as they are due.

Last weekend, troops fired shots into the air on Sunday evening at the Maiduguri international airport, moments before their redeployment to Marte in Borno State.

Most said they had been deployed to the frontlines for years now without any sign of rotation as was promised them. The Army says it has largely contained Boko Haram terrorists who hitherto held local government areas in Borno State.

The group, however, continues to launch attacks on the army and also using suicide bombers to target civilian populations in the state. Security was a key plank of President Buhari’s promises that won him the presidency in 2015.