Outrage as Nigeria police detain journalist over source of story 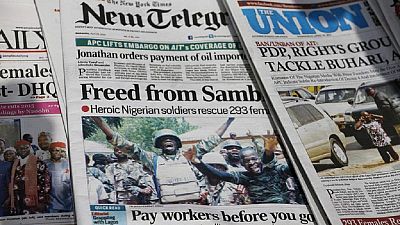 Civil society groups and online activists are demanding the release of a Nigerian journalist arrested by police over a report he filed in connection with a security seige on the legislature last week.

Samuel Ogundipe – a security reporter – for the privately-owned Premium Times newspaper according to reports is being asked to disclose the source of a police report meant for the president.

The newspaper reports that police used a false pretext to get the journalist to present himself to the station where he has since been detained.

A Premium Times report said the journalist was been held strictly on the orders of the Inspector General of police, Ibrahim Idris, who has expressed misgivings about their report on his activities.

The police apparently invited a female colleague on a different issue – which turned out to be untrue. The colleague was detained along with the paper’s managing editor who had accompanied her.

She was made to call Ogundipe who arrived on orders of his managing editor, he was detained whiles the other two employees were released.

Media and human rights groups have since Tuesday evening heaped pressure on the government and police to release the journalist.

Most online activists insist that the journalist was not obliged to disclose his source, they went on to bemoan the abuse of power by police on the same day that the acting president had ordered an overhaul of an anti-robbery squad, SARS.

Nigeria Police must release journalist Samuel Ogundipe of PremiumTimesng. Journalism is not a crime. Forcing a journalist to reveal his sources is a gross violation. #ENDSAR #freeSamuelOgundipe

With the arrest of Premium Times reporter, Samuel Ogundipe, by the Police for refusing to disclose the source of his story, I think Acting President ProfOsinbajo should begin his task of overhauling a unit of the Police with removal of this insubordinate IG.#FreeSamuelOgundipe pic.twitter.com/Zvq7ghczN1

The arrest of SamuelOgundipe a Journalist with PremiumTimesng by PoliceNG for not disclosing his news source, journalists are not expected to disclose sources. The police should stop arbitrary arrest and detention of citizens. Not on a day government announced #ReformPoliceNG pic.twitter.com/5PKfUt30Sj

Our attention has been drawn to the illegal arrest & detention of Premium Times, investigative journalist, SamuelOgundipe, earlier today.#FreeOurJournalists #FreeSamuelOgundipe pic.twitter.com/I85IjvHrjy

On the same day you ordered the police to overhaul SARS, SARS still arrested Samuel Ogundipe, a PremiumTimesng journalist because of a story. Please consider this as evidence that SARS needs to be scrapped and not overhauled. #EndSARS https://t.co/MZ2VF8GumH

I have just heard of the arrest and detention of Samuel Ogundipe.. Without Hesitation We ask the IG of Police to immediately release him..
Or have us mobilize in Protest#FreeSamuelOgundipe

PoliceNG you’re still detaining SamuelOgundipe so as to compel him to reveal his source(s), I’ve publicly confessed that his source was me…
You can check his work to see numerous instances where I’ve been cited.
If you need to arrest someone for the leak, please arrest me.

Nigeria Police must release journalist Samuel Ogundipe of PremiumTimesng. Journalism is not a crime. Forcing a journalist to reveal his sources is a gross violation. #EndSARS #freeSamuelOgundipe