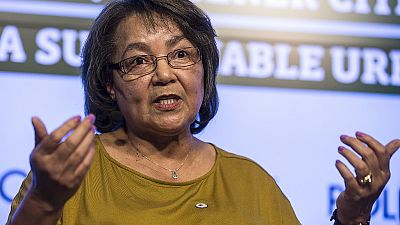 The Democratic Alliance and Cape Town Mayor Patricia De Lille are set to announce that she will resign as mayor at the end of October, while the internal disciplinary proceedings against her falls away.

De Lille and DA leader Mmusi Maimane are due to hold a press conference at 12:00 midday local time in Cape Town to make “an important announcement”.

Senior Democratic Alliance sources have revealed that De Lille and the party have agreed that she will stay on as mayor for three more months until October 31.

DA, De Lille to announce her resignation as mayor – sourceshttps://t.co/oltLDoTmSz?

She will then leave her post and will remain a member of the party.

As a result, the proposed open disciplinary hearings due to be held against her will fall away.

The separate council investigation into alleged mismanagement in the city, conducted by law firm Bowman Gilfillan, will continue however, as that is not a party matter.

So now Patty has decided to #Resign as #Mayor of Cape Town ? What was all that noise then all about? https://t.co/m7TS4Mw9Ym

Some members in the DA’s Cape Town caucus are unhappy with the outcome.

De Lille herself had been calling for the open disciplinary hearings, and many wanted her to stay to face the charges against her, one source said.

It will however give council an opportunity to start afresh from November 1 while “surviving” her leadership for another few months.

The agreement on De Lille’s departure comes after over seven months of DA internecine battles in the City of Cape Town – including at least two motions of no confidences that went nowhere, one won by De Lille at the start of the year and the other last month withdrawn.

Trick or treat? De Lille to resign, effective on Halloween, but will she remain a DA member? https://t.co/cU8LkpvRyx https://t.co/SjYdMTf5If

DeLille to step down https://t.co/uoPPXbI2uX

The political tensions from the city have also spilled to the Western Cape party structures, and nationally.

The DA at its national congress earlier this year introduced what’s known as “the De Lille clause” in its party constitution: that elected public representatives could be withdrawn from office on loss of confidence.

But the timing of this agreement between Maimane and De Lille is curious: De Lille has won in court against the DA over how it has treated her with regards to disciplinary and other processes.

The disciplinary hearing was meant to get underway, in an open hearing, as De Lille had wanted, arguing throughout she wanted to clear her name in public.