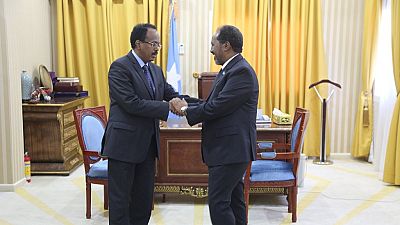 Somalia’s former president Hassan Sheikh Mohamud has waded into the Djibouti – Eritrea diplomatic impasse calling on the current government to review its position on the matter.

In a Facebook post Hassan Sheikh referred to sacrifices that Djibouti made for Somalia in the past and the need for them to replicate same.

“Djibouti paid ultimate sacrifices to stand on our shoulder….did our leaders ask themselves how many (Djibouti) children lost fathers, how many wives lost husbands or how many mothers lost their sons in our support?” his post authored in Somali read in part.

Mogadishu’s official position was transmitted by President Mohamed Abdullahi Mohamed ‘Farmaajo’ during a recent visit to the Eritrean capital Asmara. He was invited by his Eritrean counterpart Isaias Afwerki.

The visiting president noted that United Nations sanctions on Eritrea needed to be lifted given the political dynamics playing out in the region – specifically the Ethio – Eritrea rapproachment of July 2018.

The position, however, did not go down well with neighbouring Djibouti who are still in search for a diplomatic route to settle a border spat with Eritrea. Djibouti has officially sought the intervention of the United Nations Secretary General.

Djiboutian Embassy in Somali in an official reaction to Farmaajo’s talk of sanctions lifting said it was shocked that Mogadishu had opted to take sides instead of joing calls for mediation.

As a sovereign state, there is no doubt that Somalia has the right to establish diplomatic realtions with the countries of the region, however, it is unacceptable to see our brotherly Somalia supporting Eritrea which is occupying part of our territory and still denying having Djiboutian prisonsers.

The disputed land in question is the Dumeira mountain and Dumeira island which Djibouti claims is being illegally occupied by Eritrea. The issue of Eritrea’s continued holding of Djiboutian prisoners has also been central to the dispute.

The last time tensions between the two came to the fore was in June 2017 when Qatar withdrew its peacekeeping force in the area at the height of the Gulf Crisis. Djibouti at the time accused Asmara of deploying soldiers to the disputed areas.