DR Congo's Bemba could be barred from contesting December elections 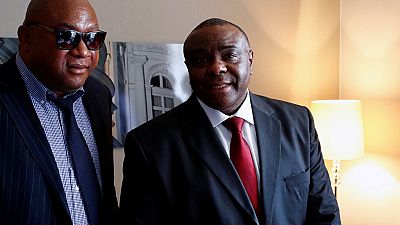 A few days after the process to receive applications for the December presidential elections in DR Congo opened, President Joseph Kabila’s ruling coalition has declared that the Congolese opposition leader Jean-Pierre Bemba should be declared ineligible to stand because of a witness tampering conviction at The Hague.

The constitutional court decides who can contest the election and the coalition has no formal role but its view is likely to carry weight, given that Kabila has ruled the country since 2001.

We have referred to Article 10 of the electoral law which stipulates that people guilty of corruption — witness tampering being a form of corruption — do not satisfy the eligibility criteria.

“We have referred to Article 10 of the electoral law which stipulates that people guilty of corruption — witness tampering being a form of corruption — do not satisfy the eligibility criteria,” Atundu said.

Michel Koyakpa, a spokesman for Bemba’s MLC party, said witness tampering is not the same as corruption and that Bemba has not been definitively convicted in any case since he is appealing the verdict.

“It’s not up to the presidential majority to declare the ineligibility of a candidate,” Koyakpa said.

Bemba was acquitted on appeal at the International Criminal Court of war crimes and crimes against humanity for murder, rape and pillage committed by fighters he sent to Central African Republic in 2002 but his witness tampering conviction stands.

Bemba came second to Kabila in a 2006 election but was arrested in 2008 by the International Criminal Court and charged with war crimes stemming from his time as a militia leader. He was acquitted of those charges on appeal in May.

His exclusion from the race would infuriate his supporters, who battled state troops in the capital Kinshasa after he lost the 2006 election.

Asked whether Bemba would be ruled eligible to stand, Corneille Nangaa, president of Democratic Republic of Congo’s electoral commission, said that was a debate for politicians and not the commission.

Kabila is barred by constitutional term limits from running again but he has refused to commit to not standing and allies have in recent weeks advanced a legal argument they say would allow his candidacy.

ALSO READ: ‘Time for posturing is over’: U.S. to DR Congo’s Kabila

That has amplified tensions which are already high due to repeated delays to the election, originally scheduled for November 2016. Security forces have killed dozens of people during street protests since then.

Bemba is determined to contest the presidency

Bemba was vice-president for three years under Kabila prior to his arrest and has a large following in western Congo. He said on Tuesday he considers himself the strongest candidate to face off against Kabila or his hand-picked successor but that he is open to supporting another candidate.

Another leading opposition hopeful, Moise Katumbi, is in exile in Europe. He was sentenced to three years in prison in 2016 for real estate fraud, an accusation he says is politically motivated.

Bemba plans to return to Congo next week after a decade in prison to register for the election. If Kabila does step down, the poll would mark the country’s first democratic transition after decades of authoritarian rule, coups and civil war.