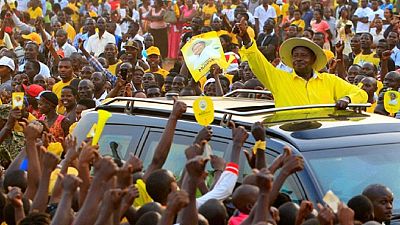 Ugandans on Thursday keenly followed proceedings from the Constitutional Court which was delivering a verdict on the petition against the controversial age limit removal. Eventually, the court approved removing the presidential age limit of 75 years, a ruling that would potentially allow President Yoweri Museveni to extend his three-decade rule.

It endorsed parliament’s decision to scrap the cap in December that drew accusations from opposition parties that the 73-year-old Museveni wanted to be president for life and brought protesters onto the streets.

“The removal of age limit may encourage an incumbent to wish to keep himself in office perpetually but the citizens still retain the power to either return the same president or elect a different one,” said Elizabeth Musoke, one of four judges who endorsed the amendment.

The removal of age limit may encourage an incumbent to wish to keep himself in office perpetually but the citizens still retain the power to either return the same president or elect a different one.

No term extension for MPs

In December when the legislators passed the controversial age limit bill, they also voted to extend the the terms of office for the president, local governments and the parliament from five years to seven years. The Mps also reinstated the two term limit that had been lifted in 2005 to allow Museveni contest in the 2006 elections.

On Thursday, all five judges nullified the extension of the terms office and also ruled that restoration of term limits was unconstitutional.

Museveni – whose 32-year rule of the east African country has been marked by corruption scandals, human rights violations and poor social services – has yet to say whether he intends to run in the next vote, which is due in 2021.

He is the latest in a string of African leaders who have tried to prolong their time in office. In Burundi, Democratic Republic of Congo and South Sudan, such moves have triggered instability.

Last December’s vote by parliament was the second time the Ugandan legislature has amended the constitution to allow Museveni to stay in power. In 2005 they voted to remove a limit of two five-year terms, which had blocked him from standing again.

“There is always danger that if the constitution is not strictly complied with, our hard-earned democracy shall degenerate into authoritarianism which leads to totalitarianism and dictatorship,” said Justice Kenneth Kakuru, who ws the only dissenting juge on the issue of lifting the age limit.

Ugandans online have since hailed Justice Kakuru as a hero.

Am not among the heartbroken Ugandans. I anticipated that the extension of term will be scrapped off and the age limit removal upheld. Am just happy with justice Kenneth kakuru’s judgement. History will indeed exonerate you. pic.twitter.com/UyFyYPWICp

Justice Kenneth Kakuru may be the only sincere judge we seem to have in Uganda! Other than this age limit “stupidity” he completely didn’t agree with, he’s a true environmentalist, i’m privileged to have met before he was appointed judge!

Uganda’s judiciary is often criticised by the opposition for what they say is a failure to exercise its independence, handing Museveni victory in nearly all court cases that potentially jeopardise his hold on power, including petitions against past electoral victories.

Many Ugandans including the political opposition, religious leaders and some members of Museveni’s own ruling party opposed the proposal to change the constitution last year.

Protests against the move erupted in different parts of the country prompting police to use teargas, beatings and detention to thwart them. In September fist fights broke out in parliament for two consecutive days as lawmakers opposed to the measure tried to obstruct its passage.

The landlocked East African country is eyeing commencement of crude production in 2020 and the construction of a pipeline to export it via neighbouring Tanzania is under way.