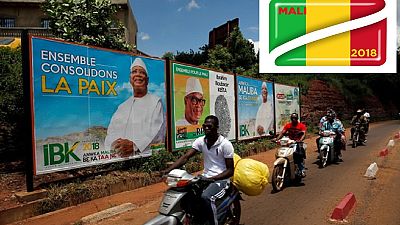 Malians go to the polls on Sunday in a vote that marks an important step forward for Mali, a landlocked country in western Africa that is home to almost 19 million people.

A 2013 poll won by president Ibrahim Boubacar Keita marked a return to democratic rule, with Keita, but the security situation in the country has since deteriorated, especially in the North.

As part of our coverage of the process in our Africa Elections slot online, Africanews presents ten top facts as relates to the elections.

This will be the eighth presidential election in Mali and the second since the 2012 coup d’etat that broke down constitutional rule.

The Sunday vote is a presidential election, where voters will only choose the head of state while the municipal elections are expected to be held at the end of the year.

A candidate needs to secure 50 percent-plus-one of the votes cast to secure an outright victory. Short of that, a second round of vote pitting the top two candidates will be held on August 12.

#5 – There are 24 candidates vying for the presidency

On 4th July, the Constitutional Court validated 24 candidates to run in the July 29 presidential race. Six applications were rejected.

Mali’s incumbent president Ibrahima Boubacar Keita, who took office in 2013, and opposition frontrunner Soumaila Cisse are expected to be the two main candidates in the July 29 polls. Keita defeated Cisse in the 2013 polls with a landslide victory (77%) in the second round of the vote.

Mrs Kanté Diébou N’Diaye , who is the only female candidate in the field of 24 presidential hopefuls says ‘what a man can do, a woman can do…the only differences, barriers or limitations are those we create for ourselves’.

Violence in north and central Mali is so widespread that some Malians doubt the election will be held in some parts, though the West African country has a long history of relatively peaceful elections.

The three weeks campaign has been dominated by a disenfranchised youthful population, the raging Islamist insurgency in the north and inter-ethnic clashes between Tuaregs and Fulanis that have left several people displaced.

#10 – Role of the international community

More than 80 election observers from the European Union will be present for the polls, while France, Mali’s former coloniser and the United Nations will be relied on to help secure the election and a likely tense aftermath of the electoral result.