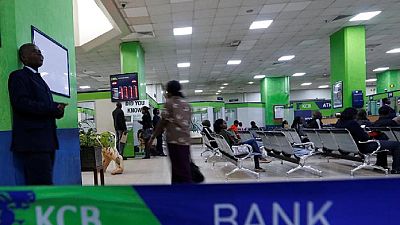 KCB Group, Kenya’s biggest bank by assets, will look at partnering with a local bank in Ethiopia, where a potential liberalisation of foreign investment rules could open up a market of 100 million people.

The Kenyan bank opened an office in Addis Ababa three years ago to be ready in the market when opportunities arise, Chief Executive Officer Joshua Oigara said in an interview. Currently there are restrictions that bar foreign banks from making an investment.

Oigara said that if Ethiopia’s economy is liberalised under the country’s new leadership and foreign banks are allowed to invest, KCB would consider partnering with an Ethiopian bank. Alternatively, he said, the bank could establish a standalone business.

We believe with the changes we see, the peace initiatives, that there will be very exciting opportunities for us.

“We believe with the changes we see, the peace initiatives, that there will be very exciting opportunities for us,” he said, adding that Ethiopia could be most exciting expansion prospect for companies like KCB in the sub-Saharan region of 1 billion people.

Since Addis Ababa’s ruling coalition came to power 27 years ago, it has kept the government’s hand in sectors including banking and telecoms.

But since reformist Prime Minister Abiy Ahmed took over in April, he is shaking up politics and potentially the economy too by emphasising the need to attract investment.

The Ethiopian government’s decision last month to sell stakes in its lucrative telecoms monopoly and other assets has raised hopes that the state might also loosen its grip on other sectors that foreign companies are eager to enter.

Among those waiting in the wings is KCB, one of just two African banks that have set up representative offices in the Ethiopian capital.

Eritrea peace deal ‘could open up the region’

Oigara also commented on the impact of the swift rapprochement between Ethiopia and Eritrea that has unfolded over the past five days.

The rapid changes follow Abiy Ahmed’s peace initiative last month. He visited Eritrea’s capital last weekend and signed a pact with President Isaias Afwerki on resuming ties, a move that ended a near 20-year military standoff after a border war.

Oigara said that the potential opening up of the Horn of Africa as a result of that peace initiative and other reforms pushed by Abiy could result in the volatile region becoming a new economic powerhouse.