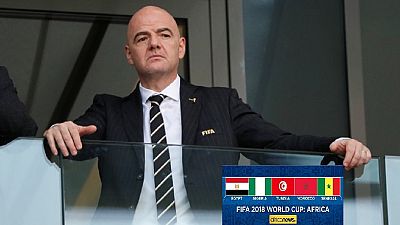 FIFA president Gianni Infantino has signalled that the global football governing body could review the fair play rule as requested by Senegal, adding that he believes Africa will perform better at the next World Cup in 2022.

Infantino’s remarks follow Senegal’s official complaint to FIFA over the conduct of Japan, which qualified to the knockout stages at the expense of Senegal, from Group H in Russia.

Senegal which was tied with Japan on points obtained, goals scored and goal difference, after playing all three group stage games, was penalised for having two more yellow cards than the Asians as per the FIFA fair play conduct regulation.

As (for) the rules, you always learn. You always have a debrief after and see what you can do better.

Senegal’s football governing body however wants FIFA to consider negative football tactics as part of its fair play rule, arguing that Japan resorted to passing the ball around in their own half during the last quarter of the game, instead of pressing for an equaliser.

“As (for) the rules, you always learn. You always have a debrief after and see what you can do better,” Infantino said, in an interview with the BBC, confirming that the ruling will be reviewed after the tournament.

Senegal’s elimination completed Africa’s worst showing at the World Cup since 1982. All five African teams including Egypt, Morocco, Nigeria and Tunisia were eliminated after group stages.

Africa will make progress in 2022

“The World Cup is for the whole world and the African teams were very, very close at the end.”

He added that he believes the continent will fare better at Qatar 2022.

“An Asian (team) made it – an African not – but I think they will be ready soon for the next one,” he said.

Infantino, who insisted on the use of video technology at the World Cup despite criticism and warnings that it was too soon to introduce the new system at the biggest football stage, said he is happy with the progress made so far.

“I think it is working pretty well. We have had a very, very positive outcome so far so we have to continue to keep the level high,” added the Swiss-Italian.

Video Assistant Referee (VAR) has caused debate among football fans despite Fifa claiming on Friday that it has enabled match officials to call 99.3% of incidents correctly.

The World Cup, whose quarter-final stage begins on Friday, will end on 15 July when the Russian capital Moscow hosts the final.