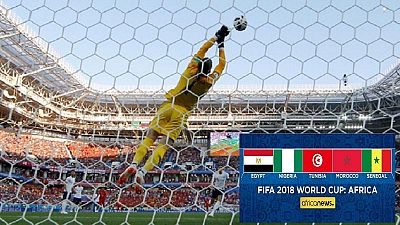 <p><strong>The knockout stage of the 2018 <span class="caps">FIFA</span> World Cup kick off in Russia with games involving the reigning European champions Portugal, 1998 world champions France, and double world champions Argentina and Uruguay.</strong></p> <p>France will be taking on South American football giant, Argentina, who have five time world player of the year, Lionel Messi on the pitch and football legend Diego Maradona cheering in the stands. </p> <p>The French team won their opening two games in Russia (2-1 against Australia) and (1-0 against Peru), before playing out a goalless draw against Denmark in the final group game. </p> <p>While the results were enough to take Les Bleus to the round of 16, there are still many doubting Thomases who are yet to be convinced that this team has what it takes to replicate the success of the Golden 1998 generation. </p> <p>France will be facing an equally unimpressive Argentina, who only qualified during their final game, thanks to a late Marcos Rojo goal against Nigeria and Croatia’s win over Iceland.</p> <p>While Uruguay is one of only three teams to win three out of three games played at the group stage of the World Cup in Russia, they will be wary of five time world player of the year, Cristiano Ronaldo who has constantly proved that he is up to the task of leading his team to glory. Portugal are the reigning European champions, having beaten France in the finals of Euro 2016.</p> <h3>France Vs Argentina</h3> <p>France’s coach Didier Deschamps will have the double task of neutralising Messi, while at the same time trying to maximise the potential of his potentially lethal attackers that are yet to live up to the hype they fuel. </p> <p>This French team that features Manchester United’s Paul Pogba, <span class="caps">PSG</span>’s Kylian Mbappe, Barcelona’s Ousman Dembele and Atletico Madrid’s Antoine Griezmann, has been tipped as favorites to go all the way in Russia.</p> <p>Argentina’s Messi on the other hand is under pressure to deliver on the biggest stage, having won every other piece of silverware available in club football, but repeatedly failing to lead his team to international glory. </p> <p>Argentina lost to Germany in the 2014 World Cup final in Brazil, and will be hoping to put their dismal group stage performance behind them and go all the way to the final.</p> <p>At his news conference on Friday, Deschamps was asked repeatedly how France would stop Messi, and he answered patiently until a fourth such query triggered a small sigh of exasperation.</p> <p>“This player is outstanding so we have to take a number of precautions,” the former World Cup-winning captain said.</p> <p>Argentina’s coach Jorge Sampaoli, who has been under the spotlight as rumours circulate that he has lost the dressing room, has rubbished such claims and instead laid out his vision for the knockout stages.</p> <p>“I’m sure France has a plan to neutralise Leo and we have a plan to get the best out of him, let’s see whose plan works best,” he added.</p> <p>The coach said France’s characteristics of quick ball recovery and pace on the break through Antoine Griezmann and Olivier Giroud would make them particularly dangerous if Argentina were unable to dominate possession.</p> <h3>Uruguay vs Portugal</h3> <p>Portugal coach Fernando Santos has repeatedly stressed the importance of his other 22 players around main man Cristiano Ronaldo as they prepare to face Uruguay in the World Cup last 16 on Saturday.</p> <p>“Everybody knows that any team in the world depends on its players, and of course we have one of the best in the world, but you can ask the Uruguay coach the same question about Suarez, Cavani – you have great players in every team,” Santos added.</p> <p>“It’s the team that has to play, if Ronaldo plays alone we’re going to lose. We have to be strong as a team, just as Uruguay are strong as a team.”</p> <p>Santos played down suggestions that fans might be in for a boring game as two teams with water-tight defences face off.</p> <p>“I think it’s going to be a great match, two teams that are going to try and win, each using their weapons. I hope it’s going to be a great clash,” he said.</p> <p>Portugal opened their World Cup campaign in Sochi with a thrilling 3-3 draw against Spain, while Uruguay needed a late goal to win 1-0 against Egypt. </p> <p>Uruguay coach Oscar Tabarez is also wary of the European champions – and in particular of their talismanic striker.</p> <p>“I believe Ronaldo is one of the best strikers in the world, he has great potential. In planning the match, focusing on our opponent and considering the level that every player has, what Ronaldo has on top of all of these qualities is that he is the leader of that team,” he said.</p> <p>“There is no single player that can contain him, not Godin or whoever. We will have to work collectively in order to try to limit the effect that he can have,” the 71-year-old added.</p> <iframe src="//embed.scribblelive.com/Embed/v7.aspx?Id=2778493 &ThemeId=19714" width="100%" height="1200" frameborder="0"></iframe>

I’m sure France has a plan to neutralise Leo and we have a plan to get the best out of him, let’s see whose plan works best.