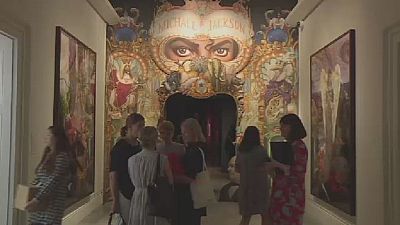 The influence of the late American singer, Michael Jackson on the world of contemporary art is at the heart of an exhibition at the National Portrait Gallery in London from Thursday.

Presented until October 21, the exhibition “Michael Jackson: On the Wall”, in reference to his “Off the Wall” album of 1979, shows how the king of pop, who continues to sell millions of albums almost ten years after his death, subjugated artists, making him one of the most represented personalities in the world.

Paintings, photographs, sculptures, videos and works of art: the exhibition welcomes the works of 48 artists, Andy Warhol, the first to represent the American singer in 1984, German Isa Genzken, through Kehin Wiley and David LaChapelle,

The exhibition is not a biography of Michael Jackson, it is simply seen through the lens of contemporary art, and the challenge is to show how much a person can mean so many different things to so many different people.

“I had the idea of ​​this exhibition ten years ago while I was interested in the heritage of Andy Warhol, and I thought that the artists to have represented Michael Jackson were very numerous,” says Nicholas Cullinan, Director of the National Portrait Gallery, at a press presentation on Wednesday.

The man with the best-selling album in history, “Thriller,” continues to fascinate people due to his messages of respect and tolerance, says Cullinan. “He wanted to destroy all types of barriers, he combined rock, rap, funk and soul. He also advanced issues of race and identity”, he added.

The exhibition has fourteen (14) rooms, each describing a facet of the singer who died in June 2009. Exhibits include evening jackets worn by the singer, his black moccasins, covers of magazines dedicated to him and some of the objects that adorned his bedside table.

The exhibition also includes the last painted portrait of the artist entitled “Equestrian Portrait of King Philip II”, in which the singer is seen on horseback with two angels above his head, one white and the other black.

But the idea is not to be exhaustive, Nicholas Cullinan explains. “The exhibition is not a biography of Michael Jackson, it is simply seen through the lens of contemporary art, and the challenge is to show how much a person can mean so many different things to so many different people”, Cullinan said.

After London, the exhibition will be presented at the Grand Palais in Paris between November 2018 and February 2019. Between March and July, 2019 it will move to the Bundeskunsthalle in Bonn, Germany before moving to the Museum of Modern Art in Espoo, Finland, between August and December 2020.