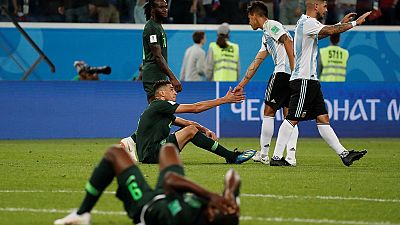 The World Cup is over for Nigeria and Iceland. Argentina joins Croatia in the round of 16.

Iceland equalises through a Sigurdsson penalty in the 76th minute.

Croatia takes the lead in the other Group D tie. As it stands, Nigeria would quqlify for the knockout stage with a draw.

Nigeria equalises through a Victor Moses spot-kick in the 51st minute.

Messi opens the scoring for Argentina in the 14th minute. Has the resurrection of the South American side began?

Up next are the thrilling clashes in Group D, where only Croatia is guaranteed a place in the next round of the World Cup.

Who's ready for the final matches of Group D?

At half-time, it’s Peru leading Australia with one goal, thanks to a Carrillo gaol in the 18th minute.

With Denmark and France, still goalless in Moscow, its the Danes who would make it to the knockout stages if results remain this way at full-time.

HT // #PER lead in a #WorldCup match for the first time in 40 years!#AUSPER pic.twitter.com/fjenuDgLhI

The double-header ties in Group C kick off at the Fisht Stadium in Sochi and Luzhniki Stadium in Moscow.

Action in Group C gets underway shortly, and it’s the battle for second place for Denmark and Australia, while Peru will be seeking their first goal and points at this year’s tournament.

Peru have been eliminated from the World Cup after losing 1-0 to Denmark and 1-0 to France.

Australia, on one point after losing 2-1 to France and drawing Denmark 1-1, need to beat Peru and hope the already-qualified French can defeat the Danes to have hope of qualifying for the last 16.

“If we score goals and we win the game, it doesn’t matter how we score. It’s important that we get the result which is the main thing,” Australia striker Tomi Juric told reporters at the team’s training base in Kazan on Sunday.

We now have our line-ups for #AUSPER!

France go into this clash, having already qualified, but quite determined to win and seal the top slot in Group C. Didier Dechamps’ men also have the extra motivation to prove the Denmark coach wrong, after he was quoted last month saying, ‘France is nothing special’ and that he didn’t ‘believe in this team’.

“He’s free to say whatever he wants. But let’s say that we will certainly use (his comments) to be even more motivated,” said French full back Djibril Sidibe.

Thoughts on the selection? #WorldCup pic.twitter.com/Til1gIraiY

Croatia, who are on six points have already qualified. Nigeria would join them, with a win that would take the Super Eagles to six points. Nigeria could still qualify with a draw, if Iceland who have one point fail to beat Croatia.

Argentina, who also have one point, must win and hope that Iceland fails to beat Croatia, in order to qualify.

Group C is less complicated with France already through on six points. Denmark which has four points can qualify with a win or draw in its last game. For third placed Australia to qualify, it must win its last game to get four points and hope Australia loses its final group match.

Another huge day of #WorldCup football…

Argentina coach Jorge Sampaoli denied reports of divisions between players and management in his squad and said they would finally get their World Cup campaign properly underway in their crucial Group D match against Nigeria on Tuesday.

“Tomorrow Argentina will start its World Cup,” he told reporters on Monday. “We have to take on board what happened to us, the point where we are now and we have to be aware tomorrow is the first of five matches that will take us to the final.

Nigeria’s coach on the other hand says there will be no mercy for Argentina’s star Lionel Messi, who has so far had a miserable World Cup campaign.

“We love this great player Messi, everybody loves him. But the question for us is not if it’s the last World Cup for him,” Nigeria coach Gernot Rohr told reporters on Monday.

“We are not here to watch him play. We’re here to get a result. We are professionals and we have to defend the colours of Nigeria. In football there is no mercy, no pity. Everybody wants to win.”

Nothing less than a win will do for Iceland against Croatia if they are to emulate their Euro 2016 success by making it to the knockout stage at their first World Cup, but it will be a tall order against a familiar foe that leads Group D.

Iceland and Croatia know each other well, with coach Heimir Hallgrimsson likening the pair to old flames due to the number of times they have met in recent years.

“We’ve played Croatia four times in four years, we’ve often said we’re like a married couple – we’re trying to get divorced, but we always meet up again,” the Iceland coach said at a recent media conference.

Both teams have always met in World Cup qualifiers, Croatia winning four times and Iceland once, for one draw. Iceland, itching to avenge painful losses like the one that cost them a place at the 2014 World Cup in Brazil, will be wary of Croatian playmaker Luka Modric who has already netted twice and showed some of his best form.